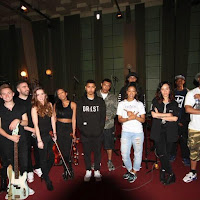 BBC 1Xtra DJ, Sian Anderson, this week put a show on at the Madia Vale studios with a little help from a few Grime MC's. Just like when Dizzee performed at the BBC Proms a few years back, Grime meets a live orchestra.

The radio regulars of Grime built up the core of the group which included Jammz, Mic Ty and AJ Tracey. Dubbed as the "Next in Grime" by the BBC, Nottingham's Mez was also present. FT's Merky ACE took to SX's "Woo Riddim" whilst Jammer was also vocally present too.