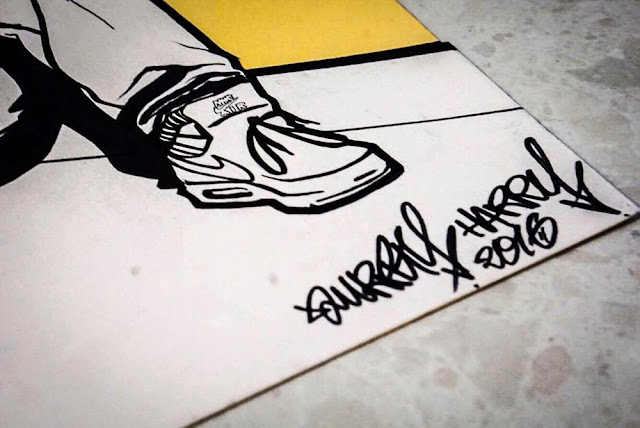 If you follow us on Instagram you'd see we post Grime art daily. One artist who stood out recently with their collection of 'Grime Originals' is Ill:Luda:Strations aka Harry Luderman. Five MC's were chosen and it's hard to disagree with Harrys' choices. These artists paved the way.

Like a lot of the older Grime scene fans, their love for the genre has been rekindled over the past few years due to the re-emergence of Grime. When the scene went Pop, many fans drifted away from the genre understandably. It wasn't what Grime once was. Having a vast collection of white label vinyl, CD's and DVD's from as far back as 2003, Harry Luderman isn't afraid to admit he's also one of those fans.

"I decided to firstly start my ill-Luda-strations business with the "Grime Originals" collection because I thought it was really fitting and relevant with the times of UK culture today. With the genre going from strength to strength it just made the most sense. I used to be a massive Grime head back in the day, back in 03/04 before it even had a name. I still have all the white label vinyls, cd packs, dvds the lot. But in the last couple of years the sound has re-emerged yet again and the UK has that voice again, naturally my love for it has been reignited".

Collaging his work to get "a more graphic design feel", Harry's collection features the 'Boy In Da Corner' Dizzee Rascal, one time poster boy of Grime, Kano, recent Mercury Awards winner Skepta, the 'Godfather' of Grime Wiley and you can guess 'whooo-whooo' else made the final cut, D Double E.

Luderman used a range of mediums when creating this Grime art. A HB pencil and pilot drawing pens to get the right shading and detail on the MC's faces, marker felt pen for the larger areas, charcoal pencils for the toning and white gel pens to get that extra detail. A range of pastel colours have been chosen for the background which makes the MC's stand more out on the textured cartridge paper. Except for D Double, he's got a darker shade of pink to bring him to life.

Each piece takes Harry a good two days to complete. This includes from the initial idea and prepping time, to putting pen or pencil to paper. On average six to seven hours a day can be spent getting Kano's hair just right or the detail on Wiley's jacket. 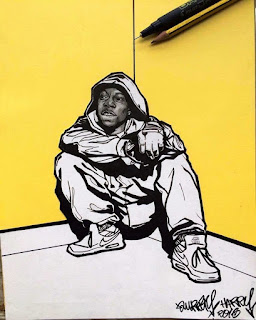 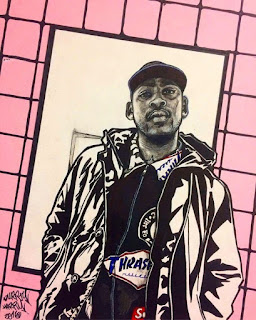 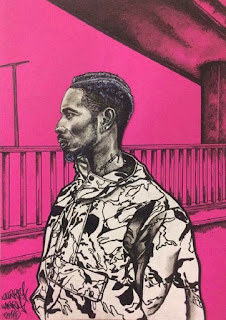 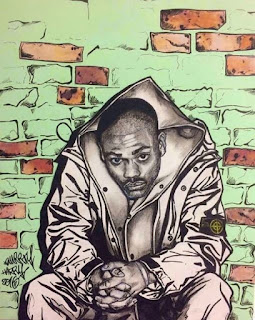 Out of the five artists, Wiley is Harry's favourite. "He always has been my personal favourite from his early jungle days, the garage days with Pay As U Go cartel, Roll Deep, his eski-beats, the debut album "Treddin' on Thin Ice" to the "Tunnel Vision" mix CD's to his most current album, "Godfather". Wiley has always been at the top for me with the amount of ground work he has put in over the years, it's ridiculous. Without him I probably wouldn't have been able to draw this collection so the title 'Godfather' is fully deserved, big up Wiley.  But each artist played their role in the scene and in our hearts, so I've got to big them all up for the music and inspiration."

The prints are avaliable for purchase at £30 a go. Pick up all five though and there's a 20% discount, reducing the price to £120 for the whole colletion. Just enter the code 'GRIMEORIG1' at the checkout. Each print is limited to 200 so grab one before they're all gone. Purchase from Harry's BigCartel page here.

"These are the pioneers without question and if you think I have missed anybody out, watch out for part two".
Premiere: Jakebob laces a velvety R&G beat on the introspective "Kold"
Premiere: Riddla brings shadowy cut "Take It Back" to Antennaterra's new compilation
Inside: Invader Spade shares his approach to imaginative new beat tape 'Final Round'
Interview: Doni Rampage on his history in grime, lessons learnt and future focus
Premiere: Prizma recruits Killa P and Long Range for skippy vinyl exclusive "Youtdem"