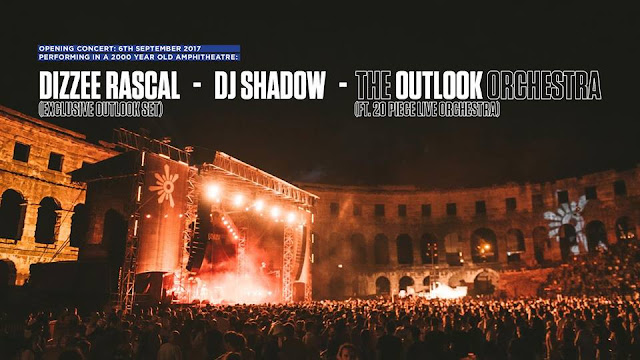 Outlook Festival is turning ten this year and it seems they've pulled together their best line-up yet. The Croatian festival, running from the 6th till the 10th September, has been renowned as being one of Europe's finest festivals over the last decade. You'll hear every bass driven genre you can think of across four days in an abandoned Fort perched over the Adriatic Sea. Not a bad spot to hear Wiley spray some lyrics or listen to Sir Spyro mix on the decks.


In previous years P Money and Skepta are amongst the names to have graced Outlooks stages. For their tenth anniversary Outlook went all out. For 2017 Dizzee Rascal will be their headlining act. Whilst he will be promoting his forthcoming album, hopefully his DJ will slip an odd Grime beat into Dizzee's setlist.

Outlook is flooded with Grime music as usual this year. Taking our sound across the continent again includes the seniored figureheads such as Flowdan, Riko Dan and Killa P, younger MC's like AJ Tracey and Big Zuu, plus DJ's including the likes of Elijah & Skilliam, Mu Nu Leng, Plastician and Rude Kid.

Alongside a seemingly endless list of Grime affiliates there will also be The Outlook Orchestra. They are a twenty piece orchestra who will be there performing tracks by Outlook family General Levy, Newham Generals and Pharaohe Monch alongside a few secret surprises at the opening ceremony in September.

Tickets for the four day event are going pretty quick, with tickets starting at £130. But don't worry if you don't have the money straight away, Outlook festival have set up a monthly installment plan to spread the cost.

Check out their promo video for this year below which includes the line-up or get more info about the festival by visiting the Outlook website here.