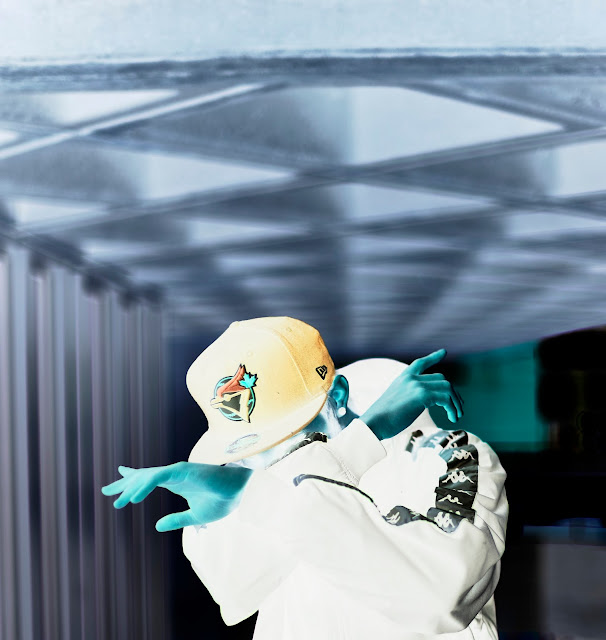 Historically, the mic men of grime have always been the face of the music, the ones to receive the fame, the attention, and the praise. However, behind every great MC, and every hit song, is a great beat. At OUAG, we wanted to create a space to exclusively appreciate the producers of the grime scene, and hopefully introduce people to some new names that many could have easily and understandably overlooked - but shouldn't. Kicking things off, we spoke to producer, DJ and label boss Aesthetic Kid about his life in grime, where he sees his sound, his label, and his plans for the future.

Although the name Aesthetic Kid only really started to come to light a couple of years ago, you couldn’t be further from the truth if you thought that the man behind the alias was new to the music scene. Since his dad hooked him up with a copy of Fruity Loops when he was 13, Aesthetic Kid has spent the last 11 years producing under several different names to some considerable success. “I grew up in Walthamstow, so a lot of people were making grime around me. There was a lot of MCs, at my school especially, and I started making grime a little bit. And then as time went by I started uploading my beats to YouTube, and I kind of got a following. By 16 I had quite a buzz around my name, in London and my area at least. I grew up with Fire Camp, you know like Fire Camp the group from Walthamstow, like Lethal B and Ozzie B. They were all my olders so I was going to the studio with them when I was a yout.”

Despite his impressive past, AK skips quickly over his younger years, preferring to keep these ‘personas’, as he refers to them, under wraps. When asked if there was a reason for wishing to remain anonymous he says, “I believe perception is the most important thing in music. You can play with people’s perception endlessly if you do it right. And to be honest it’s because I’m a very musical person and I can’t just make one genre. There are producers who will blow in one genre and just keep making one genre. I can’t do that – my personality is all over the place and that’s the way I’ve grown up – I’ve never really had one main genre that I liked so that’s why I had different personas for that.” And you can understand what he means. This whole mysterious, faceless persona not only fits with, but enhances the nature of his sound and vision beyond the music that he has been crafting since focusing on this new alias. An alias under which he has become known for innovative, futuristic sounding grime instrumentals, characterised by an ever present emotional, almost melancholy ambience. It has been a working progress but you get the impression he is stepping into a new phase of clarity and confidence in his current productions. “There was a point where I had an idea to make forward thinking grime. I was watching that scene for a while and I had stopped making grime for a long time, and I thought I’m going to come back to this because I’m really liking it but I want to try do my own interpretation of it. So my initial thing was forward thinking grime, but now I’m open to forward thinking music in general and club music.”

Aesthetic Kid is hardly midway through his 20s but has clearly grown up with grime, and music more broadly, as an integral part of his life in London. He tells me even his name pays homage to the early days of grime where lots of people were ‘something kid’ or ‘Kid D’ for example. In fact, he recalls the early wifey beats of producers like Kid D, Ironsoul and Flukes as his first inspirations to start making music, and you can most definitely hear these influences bleed from every song he touches. “I want to combine the truth of where I’ve come from and how important it’s been to me but contextualise it so it’s different in this day and age, and interpret it in a new way with futuristic sounds and intricate patterns.”

"If I’m making this type of stuff, it’s weird, I don’t have a specific process to be honest, but I like chopping up vocals. Vocal manipulation is my favourite thing to do. Or I kind of work backwards. I’ll start with textures and I’ll make a sonic pallet like a texture of sounds, or an ambience, then work my way up from there. But lately I’ve changed my work flow to making drums and bass first and then putting stuff into it and that’s kind of coming out a bit cleaner now.  But this style music takes a long time to do because its very intricate – sometimes theres 70/80 channels on the track, bare automation, bare lasers - its all mad! It melts my brain, so sometimes I just have to be like f*ck this, I’m going to make soul music the next day. [laughs]"


Although he may not have such a clear and defined system when it comes to making the music, his vision for how it comes out the other end and where his work fits within grime and underground music is, by contrast, clear and well thought through. “Now I’ve come to calling it neo – that sound. It got to a point where someone would be like ‘what do you make?’ and I’d be like ‘grime’, but their perception of what grime is has already been made because grime has been about for ages. But what I’m really making isn’t really truly grime, its something different. Along with a load of other producers that are in the same kind of group me.” If not grime, the music of Aesthetic Kid could be lazily branded as part of the ever growing wave scene, but he is keen to not let this be the case. “I had to differentiate from the wave scene because I’m part of that in many ways but that’s not the entirety of me.” Having booked the likes of Kareful (someone sitting at the forefront of the wave movement) for his own club nights, AK indeed has a lot of love for wave music, and is understandably influenced by it, but perhaps driven by his deep roots in grime, sees his music as a separate “more left field, London-y, rawer sound.”

As well as pushing his own sound, AK has been the brains behind one of the most exciting labels to emerge in recent years, Yung Ldn, with a string of extremely consistent releases already under their belt. It came about first as a club night, started by friends Aesthetic Kid and Hollow, who saw no space for the music they listened to within the already established events and parties around London.  As things progressed and Yung grew, adding the likes of Vacant and Ducati Boi to their roster, it felt natural to start releasing music, which eventually began with the Yung 001 complilation. “That took a while. I really, really made sure all the tracks were coherent and were going for this vision that I had, that I’m now kind of umbrella terming as ‘neo’.” Having a serious list of contacts from his previous work in music, AK was able to hit up a whole host of names from all over the globe to contribute, including Rapture 4D from Scotland, and Toka from the US. “So there’s a guy on there called Shlafzimmer, and he’s got a track called Vishnu, and I think that’s probably one of the best tracks on there. It might not be the most ‘neo’ sound but it’s really f*cking gully. And mans like Russian, and these Russian guys are making grime better than us! So I was like yeah, Yung Ldn isn’t really about London anymore it’s a movement, inspired by London at its core, but it doesn’t mean everyone has to be from London.”

So what does the future hold for AK and Yung? “I’m proper full time music now. The label went a bit quiet for a while because of life, but now there’s been a resurgence, and not in an arrogant way, but it’s mad to see - I’m getting such a good response. The plays are good, I’m getting messages all the time and I think it took a couple years to be appreciated but now I really see a scene for it so I’m just planning releases consistently now.” “But even with the Yung Ldn stuff I don’t want to make it just neo. Akito is a good friend of mine, along with some of the people in the club scene. So I want to incorporate the UK club scene and bass music and even with my stuff, I’m trying to get a bit broader with it now I’ve got a bit more confidence with the following and the fan base. Because we want to be playing all over the world not just doing the same sh*t all the time.”

If there’s one thing that came across during my extended phone call with Aesthetic Kid, it’s that after many years of being heavily involved in the UK underground music scene, he has finally perfected his vision and his niche, and the passion he has for this new sound is intense and infectious. With global aspirations, he is clearly excited by the prospect of what is to come, and he has every reason to be. With a sound that ties together the best parts of grime and sounds of London, with the globally accessible aspects of forward thinking bass music, and the potential to destroy clubs but by no means limited to this, (some tunes wouldn’t seem out of place in a meditational playlist) it isn’t hard to foresee a very bright future for the music of Aesthetic Kid and Yung Ldn. If you didn’t know already, now is the time to welcome in this new wave of grime producer, occupying their own space in UK (and global) club and music culture. And with Aesthetic Kid as one of several talented young producers at the helm, you'd be wise to remember the name.