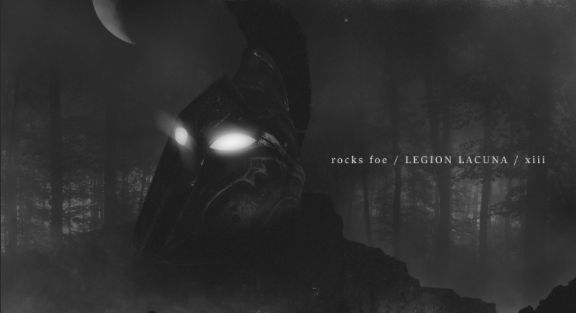 It's fair to say that Croydon MC-producer Rocks FOE has refined his sound now to the point where his music is instantly recognisable. The South Londoner is known for deploying skippy flows over gothic beats that blur the lines between hip hop, dubstep and grime, packing vivid imagery and intricate rhyme schemes into his every utterance. New project Legion Lacuna, released 16 March, is a four-track serving of this sound which shows no sign of faltering.

The self-produced project, Rocks claims, is the 'first part' of a larger release. Not to be confused with his 2015 Legion EP, this new project takes inspiration from Marvel's comic and television show of the same name; on the title track, he spits: "David Haller on a mazza, flipping out on rappers, you can call me Legion" in reference to the franchise's antihero.

The EP's eye-catching cover, created by graphic designer Alex Frances, is inspired by the lyrics of the first two tracks, and depicts the temple mentioned on "Gong" as well as the "army of one" mentioned on the title track.