Hell In A Cell 2: A Comprehensive Guide to the War 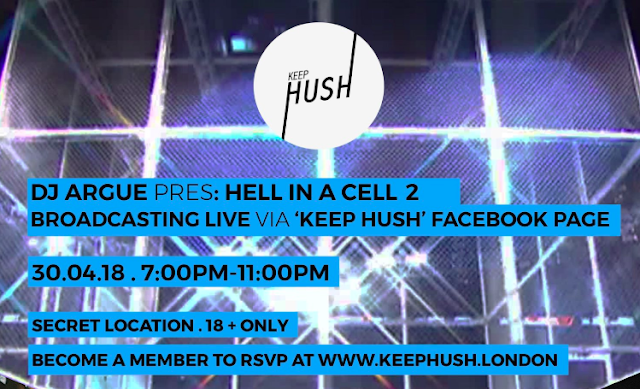 This is a developing story and will regularly be updated with the latest war dubs.

December's Hell In A Cell clash on Radar Radio was a triumph, showcasing plenty of rising stars in the grime scene including Master Peace, Logan, and namesbliss. In light of its overwhelming support, DJ Argue has organised a sequel to take place this coming Monday 30 April, and this time it's skyrocketed to include some household names. Free tickets to the four-hour event are available to the general public, the last of which can be snapped up here on the Keep Hush website.

After dominating the previous set, South London MC Ten Dixon has become somewhat of a poster boy for the upcoming clash. He officially kicked off the proceedings with a slew of eight-bar sends posted on Twitter (which were addressed by RD and micofcourse); he featured in a promotional video for the event; and he's released more dubs than any of his competitors. The sends have been coming in thick and fast. Here's a full round-up.

The first recording that really started turning heads was a fifteen-second video by Ten Dixon on 14 April, directed at Leicester MC Jafro and grime scene veterans Manga Saint Hilare and Funky Dee. Flowing with ease over Boylan's explosive 2017 instrumental "They Mostly Come At Night", he spits: "Is it me or does Jafro look like Manga? / Was that a send or banter? / I'll put a shank to your belly, then tell man 'hands up'."

In response to this, Manga was the first to release a fully-fledged war dub. On "Wrong One", he graces Blay Vision's "99 Pace" beat. In the closing lines, he takes a hilarious pop at Ten's lo-fi videos: "My future here's clear / Yours is more blurry than your front cam".

Ten clapped back with a spree of short videos, the first of which features the lyrics "You better clean those glasses / And, by the way / Can you take your tongue out of Snowy and Jafro's arses?" In the second, he taunts Manga for rising to the bait: "Man just came in the game and tweet / Eight bars, yeah, and he's mad at me". A third video takes aim at Manga, MIK, and Flirta D.

Next up was micofcourse, who filmed a minute-long video sending for Ten and Flirta, nicknaming the latter "MC Chewbacca" due to his signature tongue-rolls.

Dixon then filmed another send for MIK, micofcourse, Black Steve, RD and Flirta D, lacing Splurt Diablo's "Breaks" instrumental with bars like "swerve / MIK was better when he said ergh".

Sending season was officially marked on 22 April, when three coordinated dubs were released from Ten, micofcourse, and RD, each an hour apart, and shared via DJ Argue's Twitter. Dubs from MIK and Shxdow also dropped the same night, catching fans by surprise.

micofcourse's five-minute entry dub "Funeral Service" sees him take on a colossal Alpha.Redd beat, sending for MIK, RD, Ten Dixon, Reece West, Big John, and Yizzy. Both he and Ten have remixed plenty of MIK lyrics from the archives in their dubs, humorously using his own flows against him.


RD's first dub, "Ten Dick 'n' Mick", takes on Dixon and MIK as the title suggests. The attacks come from all angles, including a dig at the latter MC's lazy eye: "Your eye tells me you wrote shit down, but you can't see things straight / What a mistake, bigger mistake / Than your EP name, you don't ghostwrite shit". He also makes numerous references to Family Tree, which have been dismissed by MIK, because he severed all ties with the collective in 2016 and has since been repping Tizzy Gang.


MIK's first send, the pre-recorded "Fall Down (Part 1)", is a skippy take on an ominous instrumental which comes courtesy of John Brown the Rebel. He opens up the beef to some new names, including Kwam and Grim Sickers, as well as several MCs you'd expect: Ten Dixon, RD, and Black Steve.


Kwam responded with a spoken-word Twitter video hours later, with Kylie Minogue's "Spinning Around" playing in the background. He claims: "you know and I know that doing stuff like begging for a twos is so far removed from my character that I can only laugh ... That attempt was so poor that I can't really dignify it with any response other than this ... I enjoyed your basic style, I still do; I still think there's space for that within the scene of grime ... If you are gonna send for me, lads, make it good." He also claims that Dixon had been pre-recording sets at Radar because he was shook to bump into him; the two MCs have had a long-standing feud dating back to 2016.

Meanwhile, Nottingham MC Shxdow was the first MC to film a music video. The diss, simply titled "Hell In A Cell", fires shots at plenty of MCs, including Ten Dixon, MIK, Yizzy, Funky Dee, Row D, RD, and Logan. It was featured on JDZ Media, and has attracted the most attention of any dub so far. The instrumental samples $uicideBoy$' 2017 track "Now I'm Up To My Neck With Offers".


Funky Dee responded to Shxdow via Twitter, claiming that he would not be attending Hell In A Cell, and neither would Saskilla: "Why the Fuck are you saying my name I don’t know you .. if you have a personal issue with me.. we can link up 2moro".

The next day, Saskilla jumped into the war with some bars for Funky Dee:

On 26 April, Bristol royalty Jay0117 jumped into the war with a video of his own, entitled "Shell In A Cell", in response to another Twitter video from Ten which sent for him directly. The track was produced by Triple S. He makes reference to current affairs, with bars such as "You was in Radar abusing female staff / And I was with a chick, getting brains in a cab". He takes aim at Ten Dixon, Tommy B, Manga, Black Steve, Flirta, and RD.

MIK's second dub, "Genre?", once again produced by John Brown, has bars for Ten Dixon, RD, Shxdow, and micofcourse. He also takes some not-so-subtle shots at Kwam, alluding to his job as a tennis instructor with the promise: "Call me a menace, I'll show up at tennis / With a real racket, start banging on court / Hold that thought; fuck your sport."


A day later, Ten Dixon unleashed a weighty new dub entitled "The Last MC" via The Grime Report. Over a menacing instrumental from Russia's CREEP N00M, he takes aim at Shxdow, Jay0117, and RD, and also sends for 16-year-old SBK and Nottingham MC Kyeza. At the end of the video, he delivers a parody of Shxdow's music video, complete with a phone box and an imitation of his accent. Comedy gold.

The same night, Logan—the only MC so far to bring a self-produced instrumental to the table—came through with the garage-tinged "Akuma", responding to Shxdow and Ten Dixon. He's straight to the point with his bars, claiming: "Moving gassed but you're sweet like Kipling / Sending for me? You better start rethinking."

A day later, Manga returned with his second dub, the Lewi B-produced "Knock Knock". The track dropped on The Grime Report, accompanied by photography from Once Upon A Grime's very own Graeme Day. It sees Manga directly reply to both Ten Dixon and Jay0117, who he describes as "two lost youts". As you would expect from Manga, he's full of punchlines: "Fuck Ten and 0-double-1 / Can't see numbers like I'm on private." Check it out below:

Black Steve, who has been comparatively quiet throughout this whole process, has stated that he will be in Kent and therefore unable to attend the event, but he will be watching the live stream.

Update (29 April): Ten Dixon has dropped a third and final dub, entitled "Hell On Earth". The track blends two beats from Filthy Gears and Mr. Freeze, and takes on just about everyone: Shxdow, SBK, micofcourse, Manga, Flirta D, RD, MIK, Black Steve, Kyeza, JayEye, and Logan. He also mentions Rawza, Jafro, Snowy, Riko Dan, and Grim Sickers in passing; it's no surprise that he left this track until last because that's a grand total of sixteen MCs who he's just stirred things up with. This is shaping up to be a very lively clash.


That's all for now; stay locked as we bring you all the latest updates on this page, and be sure to lock into Keep Hush's Facebook page on Monday night to catch all these warlords live from the Cell. You might want to bring a raincoat if you're rolling though; there'll be plenty of shower man inside.

Update 2 (30 April): In the final hours running up to the event itself, Logan dropped a dub for Ten entitled "Ten Dyson".

So now that it's all said and done, who actually touched mic? In order of first appearance: Ten Dixon, SBK, micofcourse, RD, Tommy B, Jay0117, Omega, Flirta D, Renz, and Squintz. That's just ten MCs (four of whom are from DJ Argue's collective, Mob Set).

Things all got a bit out of hand an hour in after an exchange between RD and Omega, which led to the stream being locked off. You can catch up on the full set below:

Update 3 (1 May): The clash itself may be over, but Kyeza's still out for blood. Check out his new Silas-produced diss, "Ten Pack", below. This war isn't over yet...