Catch up on last week's Beat Boss 7 antics in full 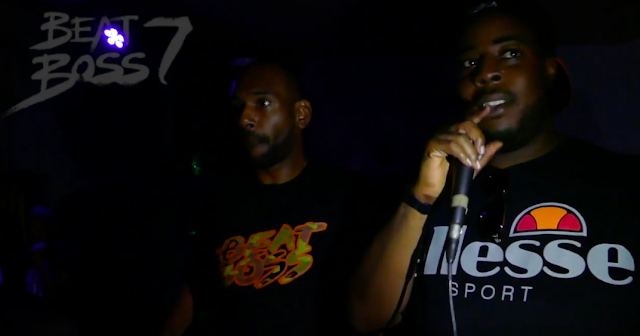 The hotly anticipated Beat Boss 7 producer clash took place last Saturday, 14 July, at Five Miles in Seven Sisters. Kicking off proceedings, Filthy Gears took on Jakebob, while Empra battled it out with Solemn, Lolingo faced Audio Slugs, and champion Jammz defended his title against Lewi B. Giving their all-important verdict on the tournament were Spooky, P Jam, and Sirpixalot; a welcome and unexpected change from regulars Treble Clef, Scope and J Beatz. Caution: spoilers ahead!

Corn aplenty was flying, with memorable moments in the quarter finals including Jakebob's collaboration with Gallah (a VIP of the latter producer's hit "Sniper" featuring Discarda controversially shouting "Solemn, suck your mum"); Filthy Gears' wildcard dub (with vocals from Flowdan, followed by a remix of P Jam's "Pepper Pot" laced by Crafty893); and Solemn's bouncy remix of Empra's "Badboy" (made popular by YGG's "Don't Talk Like That"). Brixton badman Irah jumped on Empra's wildcard dub and helped him sail through to the next round. Meanwhile, Jammz tore into Lewi B's "Slew", "Shell" and "Greeze", and Lewi retaliated by doing the same to Jammz's "Aye Aye", but it wasn't enough to beat the reigning champion.

The semi-finals were the remix round, with the producers having chosen from a list of eight tunes to remix. Most of the songs were suggestions from Beat Boss fans; my own recommendation, P Jam's "Pepper Pot", made the list and the outcome of that has been phenomenal. P Jam was so impressed with what he heard on the night that he's suggested they release a Beat Boss Version Excursion containing everyone's remixes of the song.

Starting the semis off were Empra and Jammz, who opened with remixes of Mr. Virgo's "Next Tune" and Narrows' "Saved Soul" respectively.  Empra impressed with his energetic, percussion-heavy remix of "Pepper Pot", and Jammz unleashed some guttural basslines in his version of the same track. Empra then span his imaginative reinterpretation of Danny Weed's classic "Shank Riddim" (used on Roll Deep's "When I'm 'Ere"), and Jammz caused trouble with his remix of "Next Tune", ultimately winning the round.

Filthy Gears also chose to open with a "Saved Soul" remix, while Audio Slugs opted for a skippy remix of "Shank Riddim". Next, FG reimagined J Beatz's "Parallel" as a stomping new number, while Audio Slugs used his wildcard dub: a Jay0117 vocal. Filthy Gears wrapped things up with a second remix of "Pepper Pot" containing elements of Jammz's "The World", and Audio Slugs finished off with a second, ineligible wildcard dub co-produced by Silencer. Although he won 2-1 on the judges' vote, he was disqualified for breaking the rules, and Filthy Gears went through to face Jammz in the final.

FG opened the final with a SpongeBob-sampling thumper of a track presumably meant for Jakebob, while Jammz opted for a more melodic number. Filthy's second track was textbook FG, featuring manic choral samples and maximum energy, and Jammz surprised listeners with a peppery rework of Filthy's popular instrumental "Grand Opening". Closing proceedings, Filthy sampled Lewi B, while Jammz saved his winning wildcard dub featuring N.A.S.T.Y Crew veteran Armour until last. A deserving victory indeed, and the first time that the winner's curse had been broken on Beat Boss. Jammz has set a powerful precedent.

Big up Tiatsim and J Force for organising this unforgettable night. Catch up on the full war below, and follow @BeatBossGrime on Twitter to be the first to hear about the next clash.