Madders Tiff grills Theresa May on the politically-charged 'Listen' 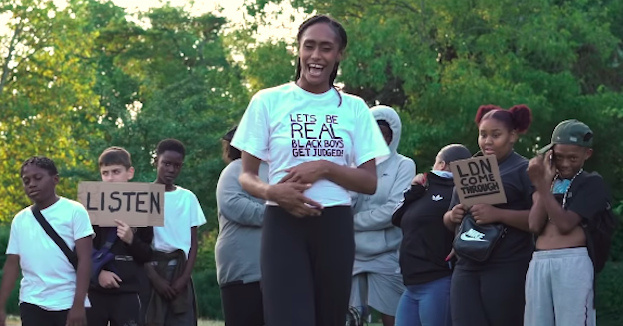 Haringey's Madders Tiff is well-accustomed to writing diss tracks for other MCs, but on her new single "Listen" she assails prime minister Theresa May, launching a scathing attack on the Conservative leader's failure to curb London's youth knife crime epidemic. She also addresses structural inequality, spitting: "The rich are getting richer / And the poor are getting poorer / Kids think it's cool to walk with a borer / That's somebody's son, that's somebody's daughter".

The song is the opening track from Madders' new EP Madders on the Block, which dropped back in June. Production was handled by Carty S, who flips Rebound X's classic "Rhythm & Gash" into a new instrumental with added sirens and re-pitched vocals.

The accompanying video, directed by Shan Brown, sees a passionate group of young North Londoners join Madders' protest. Thanks to The 4Front Project, an organisation which describes itself as a 'youth-led social enterprise empowering young people and communities to live free from violence', Madders even takes to the Houses of Parliament to spread her message.

Check out the "Listen" video below. The Madders on the Block EP is out now; listen in full on Spotify here.