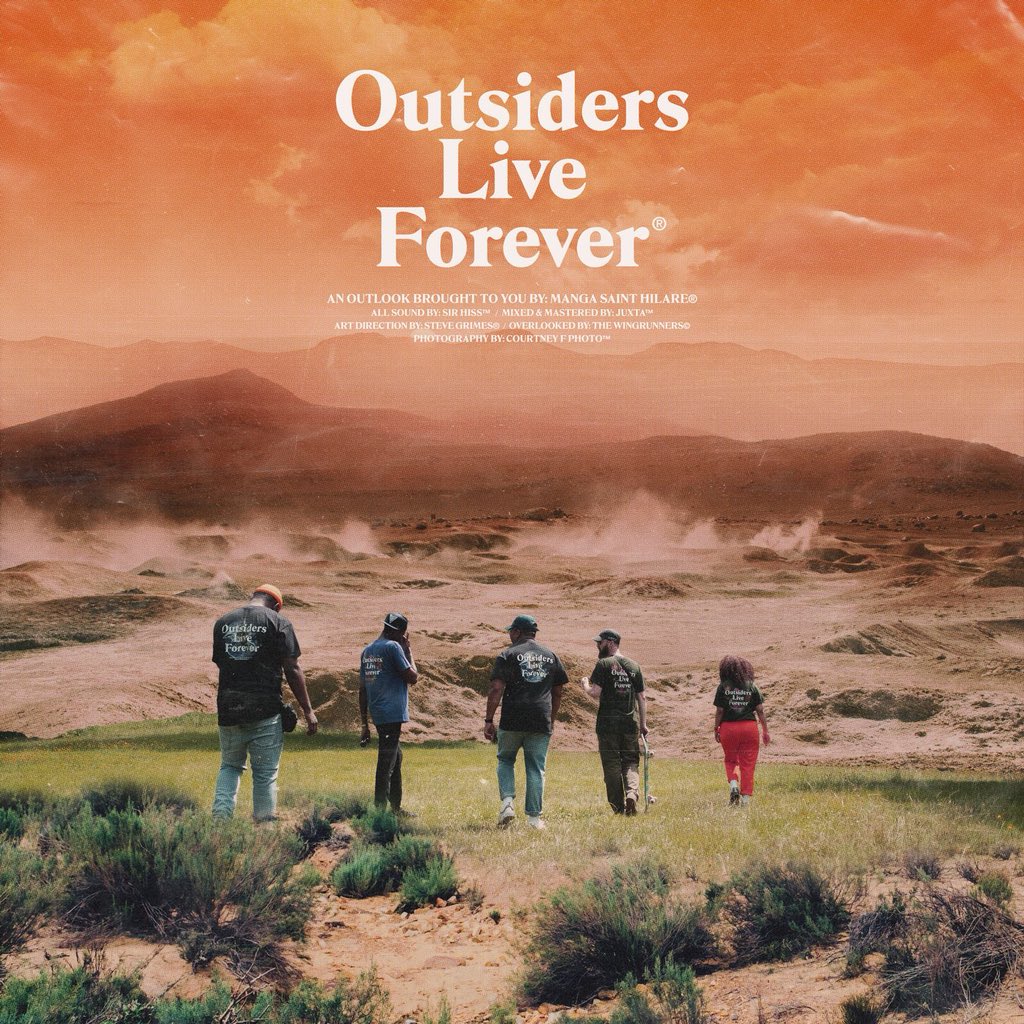 He may or may not have known it at the time, but the addition of the words 'Saint Hilare' to Manga's moniker in 2013 symbolised a kind of awakening for the North West London MC. He'd enjoyed a brief spell of chart success with Roll Deep, but now seemed determined to create a lasting impression on his audience. Ever since, he's been building up a mature and introspective oeuvre; a thoughtful and honest brand of grime, inspired by the rhyming abilities of Sharky Major and the rhythmic prowess of his mentor Wiley. The latest step on Manga's musical journey is the nine-track project Outsiders Live Forever, released today and produced in its entirety by Bristol beatmaker Sir Hiss.

Manga has always exhibited an unrivalled attention to detail when it comes to creating a visual experience as well as an aural one. Designing merchandise; directing music videos; creating his own artwork... when he gets started on a project, no stone is left unturned. Enlisting in the help of Juxta [audio engineering], Steve Grimes [art direction], The Wing Runners [video production] and Courtney Francis [photography], he assembled a motley crew of creatives to flesh out his latest concept into an instantly recognisable brand.

While he prefers not to pigeonhole his projects—many of which are full-length LPs—into concrete categories such as 'album' and 'mixtape', last year's Outbursts from the Outskirts was in essence a concept album. Solely produced by young Woking producer Lewi B, the project saw Manga and a handful of guest MCs tackle a wide array of instrumentals – some sombre, others DJ-friendly. A similar formula has been used on Outsiders Live Forever: 20-year-old talent Sir Hiss has supplied nostalgic instrumentals, reminiscent of the bare-bones Wiley and Danny Weed productions which laid the foundations for the genre at the beginning of the century.

Thematically, the new project picks up where the last left off. As a relative latecomer to the seminal Roll Deep Entourage; a North West Londoner, distanced from the thriving early grime scene in East; and an introvert in an industry where the loudest voices prevail, Manga brands himself an "outsider". This seems to be a tangibly therapeutic activity for him: Outbursts from the Outskirts tells the story of a cynical musician who has found his purpose by the end of the project, and who has welcomed a whole host of equally jaded young lyricists [Maxsta, Snowy, Izzie Gibbs] into his circle with open arms. On the new project, fellow apostle 140Aks (who was originally due to feature on an "Outburst" freestyle) even hails him as "Manga the god".

The first voice we hear on Outsiders Live Forever is not Manga's, but that of fellow Roll Deep member Breeze. It's a revealing insight into the lesser-spotted MC's personal life, with hard-hitting lyrics such as "Too dark on the inside / Wanna move from the blocks to the ringside" and "Ink ain't dried yet / Dad died and I still ain't cried yet" setting the tone for the songs to come.

The fluttering "Reflect" finds Manga agonising over the unrelenting nature of time. We get a revealing glimpse into his mind state in the form of some cleverly-worded juxtapositions ("I've got a problem with balance / A lot of old issues are keeping me stagnant / The fear of failure is what's keeping me active"). Manga spent much of Outbursts posing weighty questions; throughout its successor, he seems to offer more sage advice than he seeks. Some powerful musings are nestled in the song's second verse: "Growth is the essence of life, let your old energies die / Just remember, the things that never evolve are the ones that never survive".

This leads nicely into "Do My Ting", a textbook eskibeat song combining minimal synth stabs with fluctuating melodies, lo-fi drum samples and a motivational message. The track is a vocal version of Hiss's instrumental "Targizzle", first released on the Boxed V compilation earlier this year. Next up is "Men Are Trash", a collaboration with singer Murkage Dave which serves as a satirical spin on the oft-cited phrase popular among radical feminists. On its catchy chorus, Dave teases "if we are all trash, she must like to recycle...". Manga plays devil's advocate too, assuming the role of a defensive boyfriend and throwing in hilarious lines such as "It's only been four years, don't know why you're asking about / Why your face ain't made my 'Gram".

Camden upstart PK is in the driving seat for "Lyrical Thuggery", a more straightforward braggadocious number and the first in a string of three heavier tracks. Track six, "True to Me", brings in Boy Better Know's Jme and Frisco for guest verses over a head-bopping 160BPM instrumental. Jme is on top form, deploying a skippy flow and dropping wordplay left, right and centre ("I take notes [Not3s] like an Addison driver"). Hiss then brings the tempo all the way back down to 136BPM, a more familiar territory for grime fans, and Maxsta and 140Aks pick up the mic on the melodic standout "Stack & Count". Rising Berkshire rapper NonameDisciple then confidently tries her hand at grime on the "Outside Interlude".

Manga concludes the project with the moving "We Fall", once again delving into his life experiences to offer some honest advice ("Life is beautiful, dark and brief / Pay attention to the patterns and themes") and some witty observations ("They work hard to look like they're working / But that won't work for me"). As per tradition, longtime collaborator JGrrey closes the project with a voice note, recorded on Manga's birthday at a park in South London. Manga may have scattered some words of wisdom for his listeners throughout the project, but it's now his turn to hear a home truth: "You've never been an outsider, man."

Outsiders Live Forever is out now. Stream the project in full below and find the two artists on Twitter @MangaStHilare and @SirHissBristol for more updates.