Interview: Madders Tiff on her breakthrough, activism, and future plans 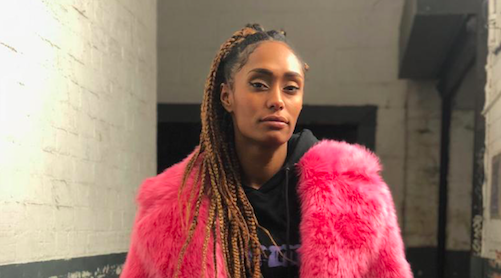 Madders Tiff is fast on the rise. The North London MC recently dropped her debut project Madders on the Block, which features star-studded guest appearances from the likes of reload specialist Discarda, Slew Dem member Kraze, and Bristol's man of the moment, Jay0117. Make no mistake, though, it's her own lyrics which are the main attraction, spanning a refreshing and weighty variety of subjects including politics and mental health. We caught up with Madders shortly after her performance at Grime Originals in Vauxhall to discuss all things music and beyond.


You seemed to burst onto the grime scene around 2015 – had you been spitting before then? What inspired you to pick up the mic?

I was a bedroom MC. I used to listen to all the sets on Déjà, Mystic FM and Choice FM when I was in school—Kano and Wiley, D Double [E] and Nasty Jack—and I used to just bar in my bedroom. When I heard [Lady] Fury, I wished I could be on the radio too, 'cause I just knew that I could do that. It was quite inspiring to see her as a female in such a male-dominated scene. I used to write lyrics over, like, fifteen years, and I always used to just whack out my lyric books and spray some bars. They were proper cheesy, though! So, I feel like I was always kinda destined to do it as a career, because I put it out in the universe when I was younger, but I didn't know that I was gonna take it serious at some point.

When I did the Vine freestyles, just for complete jokes—and because I did get such a negative response from them—it made me wanna work harder and see if I could actually do this properly. Once I made my first song, I was just like 'yup, that's it. I wanna be an MC.' That's how it started.


Being from Haringey and outside the bubble of established MCs, how did you get your foot in the door? Did you have many connections in the scene when you started out?

I grew up with some guys in my estate that could MC. I was the only female, and I was like 'these guys are shit! I'm writing bars.' I used to roll with them, and then one time we went to Camden and they were having a clash with Dappy and Fazer before they were big in N-Dubz. I just sprayed my bars and all the boys were backing it; joining in with my lyrics. I wish I took it a step further then.

I just wasn't sure how to get into it, 'cause I wasn't really in that North London scene with Skepta and Chip. I was just from Wood Green, some any girl, with these randoms on my estate. Gloka brought me to my first set, on Empire with Mad Vybez. It was just me and, like, fifteen guys. I wasn't scared; I get nervous before I spray every time, but when I'm doing it, I'm cool. I don't know if it's just excitement – it's a little buzz that I get.

From what I’ve heard, your music is grime through and through – are you ever tempted to dabble in other genres?

I was brought up listening to garage music. My mum was a bit of a raver, so we'd have all the old-school garage MCs back for after-parties. Me and my sister used to get back home from the babysitter's, and everyone would be there! I was always writing songs as well. Even now, I'm starting to write more sing-y stuff. I love being a grime MC, but I'd like to sing as well, so I'm gonna try and incorporate the two into my music somehow.

Back in the day, I tried to experiment, but people were saying 'you need to just be an MC. You need to go hard.' Maybe that was the path then, but now I'm at the point where I can experiment a little bit more. I wouldn't do rap, or drill. Drill's sick—I do love drill beats—but it's not for me. I'm gonna try some garage-y kinda grime, some house, some dubstep...  I'm working on an album, so when that comes out, it's gonna be a mixture of stuff.

Your track “Listen” was a powerful critique of the Prime Minister and her failure to take action against knife crime – when you say ‘the streets need saving’, what kind of changes would you like to see?

Politicians' solutions are obviously not working. If there were more young voices that could represent people that have actually witnessed things first-hand—people that have changed their lives around—that would be more beneficial, 'cause right now we haven't really got anyone representing young people in the Houses of Parliament. It's all very dated. Young people are the future. Really, they are.

In terms of knife crime... there's no excuse for using a weapon or taking a life, but we need to look at the deeper issue: are there enough jobs? Are there enough options in schools? The education system is kind of like a prison; it's so disciplined. There aren't enough options for creative people to excel. You kind of have to do one thing, or you're gonna fail. To save the streets, they need to listen to what's going on. Theresa May didn't even go and visit the Grenfell survivors, and yet she's quick to go everywhere else and dance on camera!

It’s great to see you performing at the Houses of Parliament and actively seeking to make a difference. How did that opportunity arise?

Temi [Mwale] runs a campaign called The 4Front Project. It's for young people, and she's been doing loads of talks and getting kids involved and trying to make a real change. She went to the Houses of Parliament with her kids and her campaign, and obviously invited me along. I brought my son along 'cause I felt like it would be a good experience for him. We created ten mini manifestos to put towards Parliament to change some new laws. I suggested that they should bring mindfulness and meditation into reception in primary schools. I think it's really important that children are being taught how to manage their emotions. We're not taught to take a moment and to breathe!

And then I performed. There was also a spoken-word poet there, and he performed. We were shooting the "Listen" video as well, so we wore our T-shirts that had slogans on about Theresa May, but they got confiscated! And we actually shot the video right inside the Houses of Parliament, even though there was a sign saying 'no cameras'! It was a really sick experience, actually, 'cause there was an MP in the room when I was performing. His face when I was sending for Theresa May was just priceless.

What’s your take on the ‘Grime4Corbyn’ movement of last year? Would you like to see more grime-and-politics initiatives along the same lines in the future?

Yeah, definitely, because it did get a lot of young people to pay attention, to do their research, and to wanna make a change. It was an eye-opener and obviously, who wouldn't love Corbyn? He's so lovely, and it's kinda sick that he loves grime as well.


It's a well-known fact that women in the grime scene are vastly outnumbered by men, and it's an issue you've spoken passionately about. Do you think schemes like women-only lineups and discounted event tickets for women are making a positive difference?

I think they're a good thing, although I feel like it shouldn't have even had to come to that in the first place. Unfortunately, women just don't get hired as much as we should. I don't know why, but we don't. It's like we have to work twice as hard, but you can't complain about it, because if you complain about it then you're gonna seem like you're bitter and you're a hater! If we do come together, and we do talk about it, in the right way, then a change will happen. You can't be silent about things for too long, 'cause everything's gonna stay the same.

So these movements like Girls of Grime and Girls I Rate and the all-female lineup at the Smirnoff event are a good thing... we can come together to represent women, but not as a girl band! We still need to be individuals and we need to represent ourselves. There were women on the Grime Originals lineup, so big up Sharky [Major] for that. There are things happening; it's just taking time. I want more women to believe in themselves, stand up for themselves, and not be afraid to say what's right.

Amen to that. On a lighter note, you recently released the 'Madders on the Block' project, which includes contributions from an all-star lineup of MCs and producers. It’s a huge mission statement for a debut release – has it achieved what you were hoping for?

It was basically an album; that's what people keep telling me. I just wanted to get material out because it was a stage in my life that I was going through, and now I'm past that journey. It's out there, people are hearing it, and now I'm excited to get the new stuff out 'cause it's ten times better. I honestly believe that I get better with every song. So my new material is exciting and I'm gonna try and motivate and inspire people through it, as well. I like giving people advice in my music. Sometimes I put things I've learnt in self-help books in my lyrics, just because people need to hear it. So, hopefully, my new stuff's gonna be uplifting.

Glad to hear it. Have you got any new music or shows on the horizon in particular that you’d like our readers to know about?

I've got a new track with J-Fresh called "Oh My" coming in October. We've just shot a video for that, and there'll be a launch party. I'll also be releasing music videos for "Raindrops" featuring Kraze and "In the End" as the finale from my EP.

Brilliant, we'll have to keep an eye out! Thanks for your time.