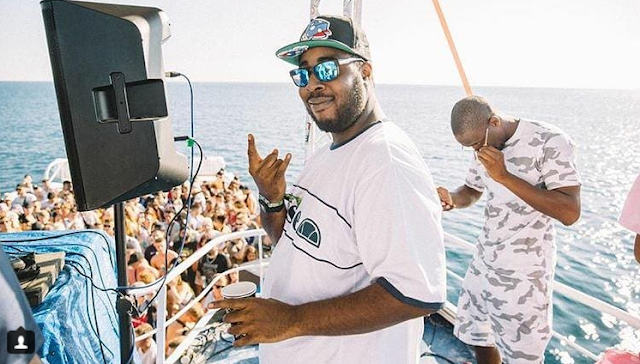 Spooky seems to work, somehow, like he's got 28 hours in a day – just peep his discography and upcoming shows via SoundCloud! That being said, the Hackney producer's recent surprise release of ten dubplates should not come as a shock, as it appears to be a drop in the ocean for him. However, the seemingly casualness of dropping this music does not take away from the lucidity of the records.

The Mode and Rinse FM DJ flows through a variety of sounds, rhythms and instrumentation throughout the ten tracks, as inspiration can be heard from reggae, dubstep, grime and garage.


"Tudor Rose x Stumble Dub" kicks the list off with garage-encouraged samples and bouncy drums. The complete riddim change halfway through seemingly takes this track into "Stumble Dub". This is more relaxed and mellow with swells of synth strings and shuffling drums.


As the image displays and intro yells, Arnold Schwarzenegger leads us into the second riddim and “to the choppa”. "Choppa Riddim" is an entire switch-up from the melodic feel of the previous track. Now we hear, dubstep fused basses and drums, with a drone-like sample of Arnie hovering above.

Versatility was mentioned in this article’s introduction, and this is where it starts to really shine through. "Careless Riddim" brings a swing-feel via its reggae vocal sample and constant guitar strums. This track is brought to the digital age by its wobble bass and ray-gun-like zaps. As the title implies, there's a very laidback feel to this mash of old and current sounds.

Spooky increases the thrill as "Bitter Butter" leads with an intensifying intro of stabbing strings and delicate percussion, one that later layers the snare and sounds strangely similar to a coin drop. Dubstep again breaks down the door and blasts out with powerful bass that cover the majority of this record.

"Spaceman" steps up next to create a digitised, commanding riddim. Low pad-type synths layer the background to create a wide ambience as robotic synths and higher-pitcher, eerier pads drop in from above. Definitely a gully track for an artist to drop a freestyle on.

Almost as if Spooky is trying to keep us on our toes, the next riddim launches into a sample of Peter Hunnigale’s "Be My Lady". Again, soldering two different genres together, Spooky proceeds to integrate heavy, metallic basses, shuffling hi-hats and snares and thudding kick drums into the softly-sung original.

"Misty Manor" brings a hard and appealing melody, pushed along by lively claps. The bassline is accompanied by misty pads, delicate woodwind and spooky strings.

As if daring the listener now to press play, "Nuclear Button" builds anticipation with alarm-type synths. A swelling, wobble bass heaves this riddim across its duration of over two minutes, allowing lighter synths and a sharp clap/snare to dance on top, as the contrasted sounds try to keep up with one another.

"Thirst Trap" commences with a sinogrime-like plucked synth. As Spooky’s producer tags drop, so the does this record – a wave of sound hits, consisting of a growling reese-bass, stabs of an electric synth, and raw percussion. Before the melodic sinogrime synth remerges to almost ease the muckiness of this track, the bass switches up to something more stuttered.

Overall, it’s always good to hear from a talented and experienced grime producer. Spooky’s incorporation of sounds, vibes, feels, genres, instrumentation and timbres collectively collaborate throughout the entire batch of dubs and produces something of nostalgia for the grime/dubstep heads, as well as a raw, futuristic electricity. Let's hope these eventually get a full release.
Premiere: Jakebob laces a velvety R&G beat on the introspective "Kold"
Premiere: Riddla brings shadowy cut "Take It Back" to Antennaterra's new compilation
Inside: Invader Spade shares his approach to imaginative new beat tape 'Final Round'
Interview: Doni Rampage on his history in grime, lessons learnt and future focus
Premiere: Prizma recruits Killa P and Long Range for skippy vinyl exclusive "Youtdem"