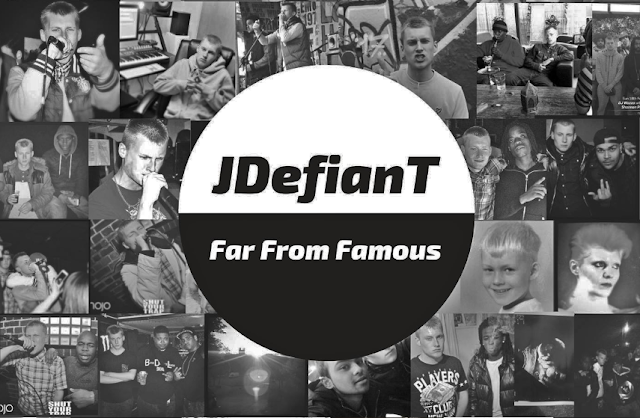 JDefianT, a pioneer of Medway’s grime and hip hop scene, someone who has performed across London, local nightclubs and coastal towns, and opened for artists such as Dot Rotten, Wretch 32, Stylo G, Dru Blu and Saskilla, releases his third project via all digital outlets – his first available for streaming. The Far From Famous EP is the next step in the Kent native's gatecrash into the industry, after already achieving a substantial amount of notoriety - #3 on Mixtape Madness with his Story So Far mixtape; acknowledgements and single plays from the likes of DJ Target and DJ Cameo, radio set shellings; a stimulating BL@CKBOX freestyle; numerous plays and appearances on radio stations across the country; artist of the week via Radar Radio’s #RateMePlz; high reviews from local sources and countless content on YouTube reaching nice figures.

The EP introduces itself initially via the artwork and title – the Far From Famous text lays on top of a greyscaled collage formed from multiple images of the artist throughout his musical journey. This potentially shows the hard work, time, effort and dedication that J has put into his craft, as well as the levels he has already achieved. Yet, self-reflecting on the fact that he is still far from famous and has a long way to go.
Turn to the tracklist and we see similar artwork behind the song titles. Many of these are very real, factual and honest titles: "Self-Sufficient", "World For What It Is", "Tryna Get Through", "Can’t Buy It". This may be a glimpse into J’s current mentality and space. Whilst being an artist who frequently spits his reality, it's easily accepted that this tape contains a good amount of substance throughout its bars.

JDefianT has this to say on the project:
“The EP was an enjoyable process, created from the ground up with every production overseen and contributed to by myself. A lot of hours and sacrifices were made for this project’s creation – travelling to London every weekend to record, then mix and master the project; late nights at my producer’s house’s making the beats and writing to them; furthermore, a dozen songs scrapped for the slightest imperfection. However, it’s a proud piece of work, self-funded, my third solo body of work and the lead single, ‘Not At All’, is getting a good response and plays all over the country”.

JDefianT takes full control of this project and looks to only one other artist feature as assistance. A hard-bodied verse and melodic chorus from Vino Deniro on "Properly" presents a nice break in the mix of the project, and something that is slightly more upbeat than the rest. "Not At All" is another track that stands out. This joint complete whacks up the pacing of the EP with a memorable chorus, skippy bars and lively riddim.

An array of producers have lent their skills through instrumentals – LUNAR Beats, BeatsOnSub, HxllSxde (formerly High Row), Shannon Parkes and Josh Goldmine. With nearly the entire EP being mixed and mastered by L Momrelle. Though JDefianT takes the lead, this is a well-oiled team project and a great first official release from the artist. With past projects receiving notable reviews, its exciting to see how this newest tape is received.