Grime gets the Ethiopian treatment on the 'London to Addis' compilation 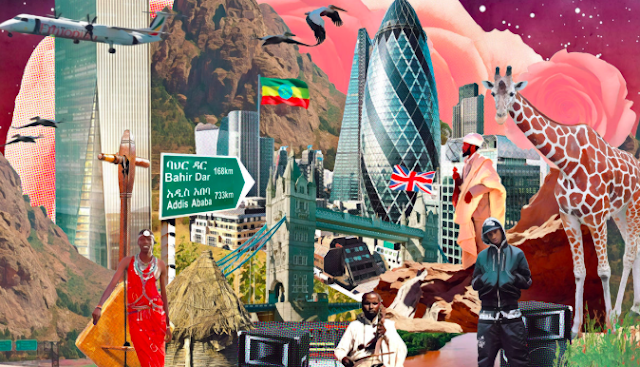 Since grime’s foundation was solidly built in terms of sound, it has seen a few external influences having their take on things. As well as hip hop, dubstep, techno and garage influences; the genre has seen its fair share of amen breaks (drawing from jungle and early drum and bass), and more left-field uses of space and improvised instruments from producers like Mumdance and Murlo.

On the matter of international music, there has been a lot of influence drawn from ancient East Asian and particularly Japanese instrumentation – but this wasn’t necessarily brought in by producers from these countries, more a nod to anime or old arcade games. No Hats No Hoods' London to Addis is the first of its kind, and goes to quite some lengths to execute a compilation of instrumental grime tracks using traditional Ethiopian instruments and time signatures. Recorded over a week in the capital of Ethiopia—Addis Ababa—an all-star lineup of grime producers were invited to make use of local instruments including the masinko, krar, washint, drums and traditional vocals.

The project starts off with Darkness, of “Eski Thug” fame. “Blue Nile” is an eight-bar heater sounding like this project started in 2003, using old school sounds partners with traditional Ethiopian percussion. TC4 really squeezes a lot from impactful African drums and well executed vocal cuts, adding a very simple yet effective bass on “Kebero”. Ignorants makes good of the washint for his hook on “Orthodox”, making a moody track broken up by traditional vocalists. A melodically implemented krar laid the foundation for “Addis Ababa” coming from Wize, which was also used in his signature choppy style for Lolingo’s “Lalibela”.

Mr Virgo on remix duties next up for his take on JG’s “Eskita”; a bass-heavy version which is war-ready. The war sounds continue into Restraint’s “infantry VIP”, only for Dexplicit to step things up a notch, using the ethereal wishant on “Lion King”. J Beatz up next with some clever cutting and sampling of Ethiopian melodies over a skippy grime beat on on "Sidama". The choppy style continues on DJ Cable’s “Adama”. The blend of UK and African styles sit side by side in harmony for Ignorants’ “Uncolonised” (one of the first ever grime tracks to be recorded in a 3/4 time signature), in contrast to Shudan’s “Hyena’s of War”; where the producer has audibly used every single Ethiopian instrument at his disposal.

Sir Pixalot builds dark ambience in “Ch’isi” which is expanded on with some interesting use of square waves by Blakie & Valentino 343 with “Amesegalehu”. The wishant becomes focus again with Sarks’ “Makele”, creating an almost 8-bit sound, only for Captain Over to strip things all the way back with “Tibs and Miranda”, a real percussive masterclass. King Triton himself, JT The Goon, combines his gliding squares with traditional woodwind to give us “Sunrise by Bete Giyorgis”.

Proc Fiskal builds an R&G track using many traditional Ethiopian influences as though he’s been doing it for years on “Geez Script”, while Westy turns up the trap snares for the aggy “Isati”. It’s the turn of DJ Cable again as he chops up authentic strings on a Kebero inspired beat for “Dessie”. JT The Goon comes back heavy on “Simien Mountains”, and Captain Over returns for the weightless “Ethiopian Airlines”. Rounding off the compilation is a VIP of Mr. Virgo’s remix from earlier, giving it a bassline 4x4 rethink.

In this unprecedented work, the use of previously unutilised styles, influences and instruments make for a truly original sound. London to Addis is available now on No Hats No Hoods’ Bandcamp site with a limited edition T-shirt offer. Go cop this now for a surefire way of diversifying your sets.