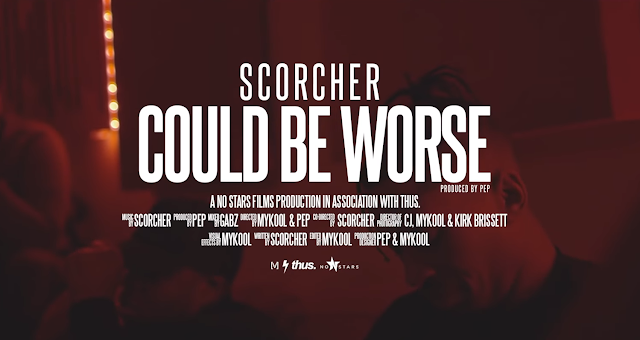 Now that the dust has settled on Scorcher returning to the music scene, and the flames have subdued from his first single, "Could Be Worse". Let's look into how exciting this actually is and what we could expect from the North London rapper.

From the jump there was an underlying buzz since Scorcher came back from his holiday roughly 3 weeks ago - the guy's accumulated nearly 23k of Instagram followers, held a private party, and launched himself straight back into the studio. After an anticipating clip of him sitting down with the multi-talented Pep, (in Pep's own, fairly new, studio, No Stars Studio) we were all excited to see where this was going. Of course, in just under 3 weeks, we're hit with a brand new single and visuals posted on GRM.

The video seems to be based in Pep's studio as it conveys a similar atmosphere - a dim red glow, booth, and wall mounted sound dampers. To just briefly mention, this is a phenomenal effort by Pep as well. Not only did he produced the record, but he was also a co-director and co-production designer for the music video (alongside Mykool). Plus, all of this is under a 'No Star Films' - seems that Pep is working.
Like the instrumental, the cinematography is cold, eerie and almost disconnected from human emotions. Our eyes are hypnotised by electric flashes, smoked out rooms, grainy effects, and slow motion edits. As the slow cuts build our eagerness for what's to come, we are re-introduced to the legendary Movement affiliate; Leader of the New School; Skywalker, as he mummers "Top of the roof" - made infamous from "Dark Night". It seems as though Scorcher is back on his Batman flex as he follows this with, "It's that Bane shit, Bane". It's more likely that Scorcher simply related the feel of this instrumental, to the Bane persona, but we can imagine here that, after returning from not such a wonderful place, he has mentally switched characters in the Gotham universe, from Batman, to one of his powerful and clever villains. Furthermore, Scorch may even be stating how he is about to dominate the UK rap scene, in a similar way Bane broke Batman. The rapper continues with an aggressive and ferocious flow, entwined with bars of how he's above the rest; his annoyance of rappers talking too much crud shit; his anticipation for 'next Summer'; how he's doing him; "boss stress"; confronting all those saying that he was done; and of course, the bar everyone is feeling, "I'll touch something then go and make a love song. Touch something then go and check a groupie. Touch something then and make a movie."

Peeping this new single and all its intricate features - musically internal and those surrounding - we can potential judge the vibe Scorcher is currently in and where he's going. He certainly comes in with a blast - an amped masculine aggression and dominance but still, in a calm and collected way. He definitely doesn't appear to be breaking a sweat but you can almost hear a pent-up energy (or anger) in his voice and flow. From what Scorcher has been through in the past months, it's understandable why he chose this beat; why he chose this vibe and atmosphere. It's savage almost; cold; unique; and dangerous. He attacks this beat with an almost frenzied flow - what could be seen as him wanting to get all his thoughts out, and the primal urge to severely stamp out those who doubted him. Yet, his demeanor in this is laid back and casual. Great to see, as it seems he is done with a lot of the he-say-she-say and egotistical issues that surround young men/rappers. It seems his focus and hunger is on taking over the scene, doing it his way and grabbing the heights he can now with this new world of pop culture in the UK.