With additional reporting from Luke Ballance

Close collaborators Grandmixxer and Mez have once again partnered styles to bring us "Go Freestyle" – a whirlwind of thinly-veiled disses aimed at Yizzy and Chip, set against a backdrop of intense production inspired by Dizzee Rascal's classic instrumental "Go".

A steady pounding of various synths and controlling kicks drag the beat through this course of music. Almost military sounding snares dance around, providing rhythm and excitement. These sounds and this feel create an atmosphere that seems to hold you on a cliff edge; not dropping you from the vast height but not pulling you back to safety either. Both artist and production work hand in hand with each other - both, just as sporadic; just as fierce; just as dominant.

Mez attacks the riddim with his lyrics, style and lively attitude. Bars and flow are sprayed into the mix like loose paint. Yet, it is controlled chaos; managed by the innovatively skilled MC. As soon as the starting pistol rings out for 'Ready, Set, Go', Mez's yo-yoing vocal tones lay out familiar grime topics - bars; skill; chatting shit; catting lyrics; haters; and chilling with baby mums. Frankly, Mez could spit about knitting and it would still be extremely interesting. There really are few other MCs that match his character and uniqueness – a great artist to watch and hear.


The visuals are directed by Bipolar Spider. These are chilled, fun, and informal. The black and white shots show the pair hanging outside Rinse studios; enjoying the record, and the moment.

So, why's Mez got beef with Yizzy and Chip? Earlier in the week, Chip posted a tweet insinuating that none of this generation's young MCs are as good as he was at sixteen. Yizzy disagreed and suggested that the two of them should go on a set together, sparking a fiery and public debate between the two which saw Chip later tweet "Your from Lewisham? You will never be Novelist. Safe man." 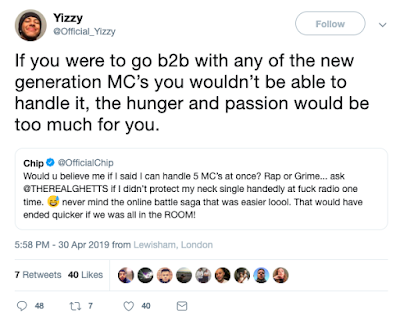 Mez's approach to this whole situation is more nuanced – he disagrees with Chip's statement, but also seems to hold contempt for Yizzy, who has long come under fire from fellow MCs after it emerged in 2017 that he'd been stealing entire verses and passing them off as his own on freestyles. Victims of his lyrical theft have included Jafro, Skeez, CeeJay, and Phidizz – the latter of whom is from Nottingham and therefore local to Mez. This is mentioned multiple times throughout the track.

A few hours after "Go Freestyle" dropped, Yizzy cryptically tweeted "Speak with you chest or don’t speak at all lol." This presumably addresses the fact that neither his nor Chip's names are mentioned directly on the freestyle.

Update (7 May): Chip has now also responded to the diss, tweeting: "There will never be another @DDoubleE7. All u young spittaz tryna copy his style are fake fucking frauds. Shit versions. Mans from the era where copying a mans style is illegal."