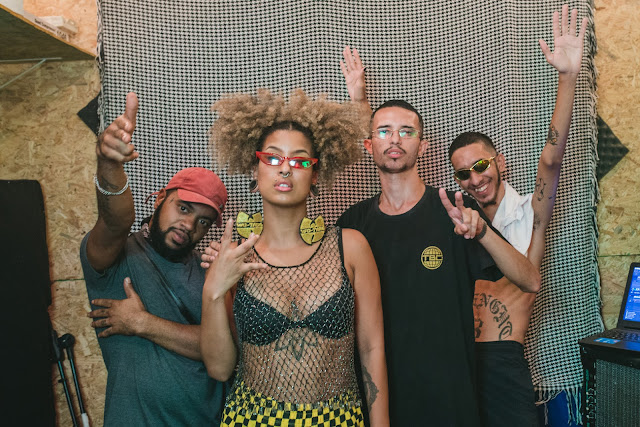 From its surprising origins in 2005 to the recent resurgence, we took a look at the exciting scene developing in Brazil.

Grime emerged from the gritty estates of London in the early 2000s, born in a world of disenfranchised youth, who built themselves a music scene utilising an assortment of illegal pirate radio stations. MCs like Wiley and Dizzee Rascal paved the way for a generation of young artists that would come after them.

People often assume that grime is purely a British phenomenon and underestimate its international reach as a result, but this isn't entirely accurate. MCs in Australia have garnered millions of views, Japanese MCs have built an underground scene, Russia has quite a long list of grime artists, and that is far from the end of it.

Within the past couple of years, a new scene has begun to develop in Brazil, with a similar underground and DIY feel to that of early British grime. Perhaps the first of its kind on the continent and one of the more promising international scenes, Brazil already has a good selection of MCs, DJs, producers, radio sets and live events that are pushing grime forward, all the while developing a local fanbase in the process.

This new generation of Brazilian artists was introduced to grime as a result of the resurgence it was experiencing during the mid-2010s, pushed by the likes of Skepta, Stormzy, Dizzee Rascal and many others. One artist that we spoke to, who goes by the name Fleezus, is helping push forward this sound in Brazil.

How did you find out about grime music? What'd you like about it?

"I found grime in mid-2014 through Dizzee Rascal and Skepta. A few years ago, there was a group called Versus (who still exist, but with different members) that played Dizzee and Skepta at their party. I saw an article about a festival where he sang, I liked its aesthetic and went to search more about it.

Grime means a lot to me today, it is the way I express myself and how I behave. I like grime because I can be what I am and I can pass that on to the people that listen to me or go to my shows."

What kind of music were you into before grime?

"Here in Brazil, we have a very rich culture when it comes to music; I have always been into national music genres such as bossa nova, samba rock, and samba. Always transitioning between rap and their variations, rap has always been in my life since I was little!"

Can you tell us a bit about the Brasil Grime Show? Who created it?

"The Brasil Grime Show is a dedicated program for MCs that want to try and rap or duel each other over 140bpm beats. They also invite DJs to perform as MCs, which makes it (the show) more interesting, all based on improvising. Everything live! The show was created by a group of friends in Rio de Janeiro – I won't cite names because there are a lot of people behind it."


Is grime popular or known in Brazil? Do you envision a big scene developing?

"It is still not well known, let alone popular, grime is in its baby steps here in Brazil but I imagine that it will grow to be much bigger.

As a grime MC, I feel like I have a huge responsibility to bring the genre to here in Brazil. I imagine grime will be big here – a lot of people are getting interested in it. "

In 2018, Fleezus released "BRASILREALGRIME" alongside local producer Li-O. The production is a clear derivative of classic eskibeat instrumentals like Wiley's "Morgue" and "Jam Pie", overlaid with Fleezus' distinctively laidback style of MCing.

A group of friends from Rio de Janeiro built the Brasil Grime Show. The group hosts radio sets on YouTube featuring an assortment of MCs (and DJs) that are curious enough to try MCing on the new sound. Each set showcases local talent MCing over grime instrumentals for around 20 to 30 minutes, not dissimilar to British radio sets, with the only major difference being the language and fewer T-shirts. The sets capture the same energy that British grime sets carry – underground, DIY and pure energy.

Brazil is also unique among international scenes in that there already seems to be a good amount of women involved, both on the DJing side and via MCing. A female-only grime set was released in April 2019.

British grime references are common, with the track "Flow Mez" making reference to British MC Mez whilst spitting over Conflict's remix of General Courts' "Bongo Dub". Most instrumentals played in the sets are also of British origin.


Surprisingly, this isn't the first time grime has ventured into Brazil. During the early 2000s, grime, dubstep, and UK garage all crossed the Atlantic into the ears of Brazilian DJs. From a 2008 Kode9 set, within the first 2 minutes, you can hear a snippet of the first Brazilian grime song ever made.


This song, titled "Voh Keimah!", was released by DJ and producer Bruno Belluomini alongside MC Jimmy Luv, and was debuted in 2005 at a São Paulo event called "Tranquera", a night dedicated to various forms of electronic music, including grime, garage, and dubstep. This song and the movement behind it join the assortment of ambiguous histories behind many international grime scenes, which often lack documentation, yet further reaffirm that grime was truly international even in its burgeoning years.

It is hard to find information about grime in Brazil during this period, but luckily we were able to get in-touch with Bruno Belluomini himself and queried him about this early period of Brazilian grime.

Were you the first in Brazil to DJ and make grime?

"That time social media was almost comprised of blogs sharing pirate radio rips or sites hosting discussion forums and I was totally into it. I did it without noticing or thinking about it. I was completely immersed in the hardcore continuum, listening and playing UK music out on vinyl at that time, so it was natural to create something related to that. I had a chance to contribute to this culture and present it to the Brazilian audience, not only virtually with podcasts and mixes online or writing in Portuguese about it, but doing parties with a proper sound system too. Of course, some magazines and newspapers featured what we were doing down here – but I think the most important thing was to create enough information to attract people attention to experience the sound live out of the speakers at our parties. Nothing substitutes that."

How did you get into grime yourself?

"Early 2000s, we had Zinc’s "138 Trek", Horsepower’s "Gorgon Sound", and a lot of lesser-known sonic hybrids like Jon E Cash's Black Ops releases and Terror Danjah's Aftershock instrumentals emerging from underground pirate radio, blending UK garage, dub, reggae, and MCing. These sonic mutations got my attention as I was listening to Rinse FM on a regular basis back in the day, looking for something different from the regular electronic music being played to major audiences at that time. All these new things sounded very exciting to me – not only on a musical, rhythmical level, but the attitudinal aspect too. It sounded like raw punk rock to me."

Both you and Jimmy Luv made a grime song back in 2005. I'm curious how that came about?

"Jimmy was pioneering ragga and dancehall at that time, but he was aware of these new sounds coming from UK too. He liked grime, so I did an instrumental track and he dropped his rhymes over it. I loved the result and we began to send it to some DJs. Kode9 was playing it on Rinse FM and Rag & Bone’s Warlock cut a dubplate from it."

You started the first grime night in Brazil — Tranquera. What led you to create it?

"In fact, Tranquera was a night that encompassed everything from grime to early dubstep sounds, including Jon E Cash’s sublow instrumentals, El-B's dark 2-step sounds, Toasty’s breakbeat garage vibes, Vex'd experimental tracks, and so on. It was cool because there weren't specific tags to pigeonhole this new music, and genre boundaries were way too loose and blurry at that time. Tranquera was my music research, my very own vinyl crates, and I took it to the clubs to share it with people. I was lucky to have an audience for all this unconventional music. RIP Tranquera, 2005-2012."

Would you say grime had a following in Brazil during the 2000s?

"No. It was very small, and only a few people were aware of it. The majority of the MCs preferred to keep their rhyme battles over US hip hop instrumentals and something around 135BPM, even half this tempo, was too strange to them. Dizzee's Boy In Da Corner got people's attention, but not enough to fill an entire Friday night dancefloor in a venue with a regular electronic music schedule. But we had a lot of fun doing our underground parties downtown."

I can't really find any about Brazilian grime 2008 onwards, excluding the past two or so years. Did it disappear or is there just no information about it?

"Around 2008, Tranquera was totally into the early dubstep sounds, from Burial to Skream and Benga, from Pinch to Skull Disco. I was too busy running it monthly, presenting weekly radio shows and writing content in Portuguese – I had to be picky and narrow down my musical research because there were too many vinyl releases flying around that time, and although some grime was being played at Tranquera it wasn't like early 2000s scarcity anymore. There were too many releases but too little time to hear them all."

Did Brazil have pirate radio stations or a similar set-up over there?

"Unlike pirate radio transmissions in UK, everything here in Brazil happened using the internet's free space – self-publishing tools. The first stage was using blogs to discover and share UK pirate radio rips. Then online radio was used to livestream this content, with its indexed archived podcast feeds to further access and research. Mixes provided tracklists, covering this specific subject, alongside its artists and labels. Before Facebook, Instagram or Twitter, Myspace and Orkut helped people discover things overseas – later SoundCloud, and YouTube were used too."

The scene in Brazil again reinforces that grime is borderless, and can work just as well even when executed halfway across the world. Fleezus tells me that the Brasil Grime Show hosts grime events in the country, but aside from that grime is yet to be played at clubs or on the radio in Brazil, with the only notable exception being Skepta, but he hopes this will change in the future.

If this is something that interests you, you can check out the Brasil Grime Show on YouTube where they upload fairly regular sets. You can also find Fleezus on YouTube, SoundCloud, and Twitter.

We've created a playlist on YouTube and Spotify that you can follow which contains a good selection of Brazilian grime songs – check them out below!