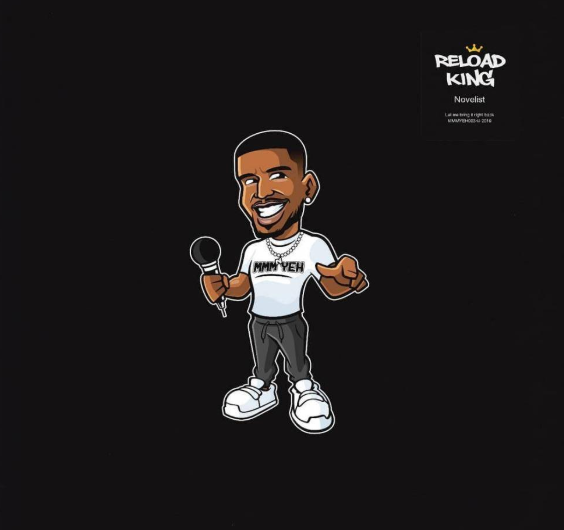 Lewisham star Novelist has today declared himself the Reload King with the release of a brief four-track EP of the same name. Exuding a raw but relaxed confidence, he takes on a stomping selection of amped-up instrumentals from grime's past. A standout inclusion is DJ Mondie's "Straight", one of the most recognisable instrumentals in the genre's history. Others follow a similar flavour, with bass-heavy foundations perfect for showcasing Novelist’s varied lyrical abilities.

"Banger Riddim" has an experimental edge, launching the EP with pace and energy, as Novelist rides a self-produced 2015 beat that has a strange similarity to Tyler, The Creator’s production on "Who Dat Boy" off Flower Boy – something about the eerie strings and distorted bass in both instantly catch in your ear in the same way. "Rowdy Riddim", a Zeph Ellis production crafted during his formative years as Young Dot, again pushes subtle boundaries with a sparse, clicking percussion alongside unpredictable, off-beat bassline stabs – complemented by N.O.V’s understated aggression.

There is a respect and reverence for the traditions, though. Listening to Novelist on Reload King is at times a clear throwback to the classic sets from DVDs and pirate radio that built lyrics around repetitive phrases and big impact lines – this style is revisited expertly by the new generation MC. "Straight Riddim" is structured in rigid 8-bars, shifting between focal lyrics yet still sustaining the sharp flow that drives the track.

On the intro to "Grime Riddim", he pays homage to the late great Esco, the Slew Dem Crew member whose take on the iconic Waifer beat is widely regarded as the best version on offer. Nov's version demonstrates that same taste of original hype lyrics, with a chorus shouting out ‘all the real man’ in North, South, East and West London.