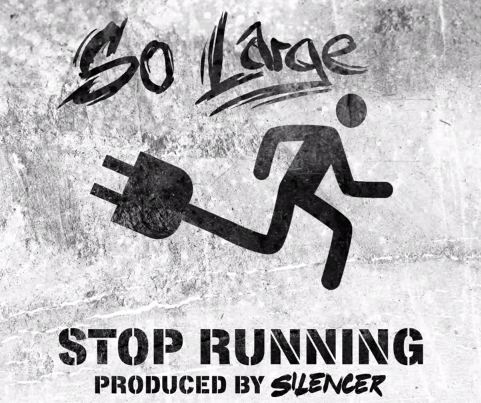 So Large, an artist that hasn't been the most prominent on the music scene as of late, crashes in like he owns the place, and in spectacular fashion, on 'Stop Running'.

So Large sums it up in one lyric: "Everything's getting bun!". He steps onto this threatening instrumental, produced by Silencer, as if he's wearing Timberland's in Summer - assertive, dominating, intrusive, and with definitely no chill. Like getting chased down the street after trying to rob your neighbours new, shiny dustcaps; this is the thrill that So Large pumps into the record.

Sweat dripping, heart beating, and breath panting as the Esso rapper is hot on your heels; you barely get a chance to even attempt to reload the track. There isn't a space unfilled of So Large's big presence, forceful tone and insistent bars. Heavily focusing around folk running off on the plug, Large gives us a detailed analysis of what would happen if such an occurrence happened to him.

Teddy patterns the beat that fits perfectly under Large's mid-high vocal tone. The riddim is fused of deep, dynamic bass, like Large's footsteps echoing underneath those Tim's; a melody that could suit well in Jordan Peele's next thriller; and slapping percussion, as if said "dustcaps" man has now caught you and is beating you're ass.