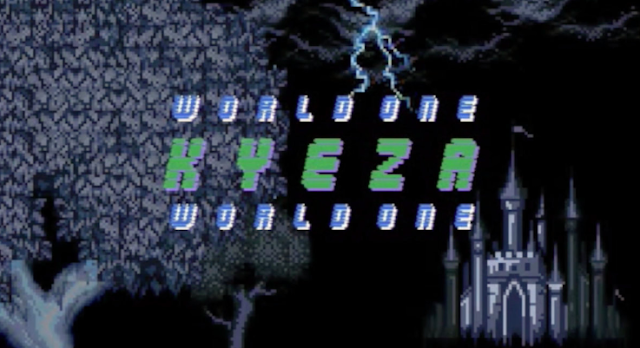 Three years on from the release of his free EP Young Shinobi, Nottingham MC Kyeza has returned with the six-track project WorldONE. Described on his Bandcamp as "half self-produced", the video game-inspired release features three of his own beats including bassline-tinged instrumental outro "Skin Out Riddim". Interestingly, his Sir Hiss collaboration "Where Was U?", which dropped earlier this month, is notably absent.

On opener and title track "WorldONE", the Top Valley lyricist laces his own fluttering synth arpeggios, ambient drips and detuned chords, spitting some revealing bars about his outlook on life (see: "Man ah feel pain so I twist dem herbs" and "Dem man live long but they never live a lot") as well as touching on darker themes.

Taking to a production from CASisDEAD's renowned DJ Mystry on the abrasive, dubstep-leaning "Ya Get Meh", he lets off some iconic bars which he's been spraying at raves for at least two years: "Dem bwoy don't want none, ya get meh? / Pull up and slap weh again, ya get meh?"

The project finally sees the release of choppy 2017 favourite "No Time", produced by GUNDAM, as well as the Jammz-produced "Corn & Pain", the video for which dropped a fortnight ago. The sole feature on the EP comes from Mannimon, a fellow East Midlands barrer and one half of the duo Zed Boys.

Earlier this year, it was revealed that Kyeza and Sparx are set to face London's Dramah and Kontagious for 2020's Lord of the Mics IX, in what could be the platform's first ever two-vs-two clash.

WorldONE can be streamed in full and bought below. Find Kyeza on Twitter and Instagram for more updates.