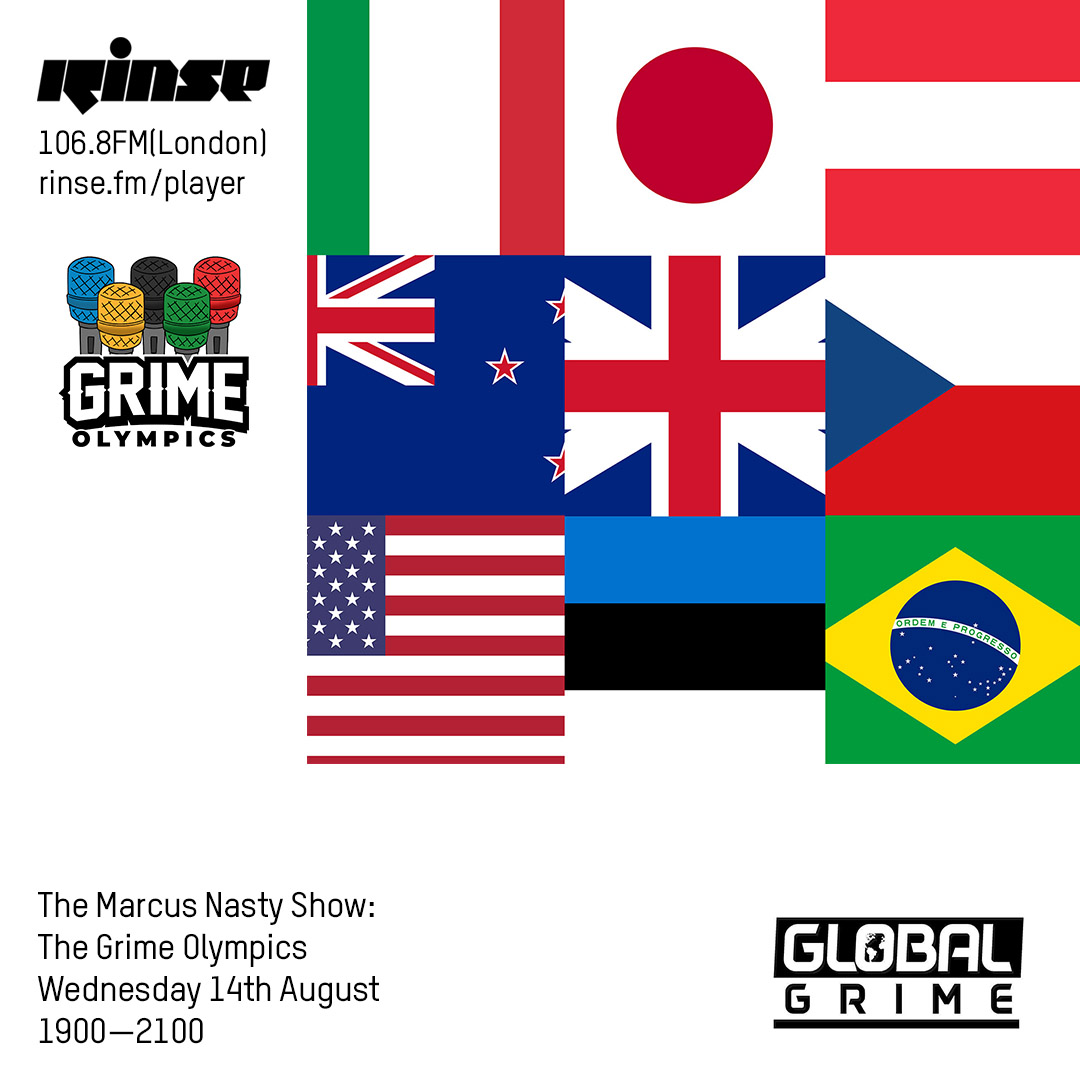 Each 'team' has a 13 to 17 minute set by themselves, concluding each 'round' is some commentary by the hosts who discuss the MC's performance, before moving onto the next team. Listen to the full set below!

If you like the show, you're in luck, because there might be another one in the Winter.

The UK is represented by Logan Sama, Ten Dixon, Jon E Clayface, Popzzy English, and Miz. However, since many overseas scenes are overlooked, we thought we'd give a brief overview of every overseas artist that appeared on Grime Olympics.

Japanese grime has been around for a good 10 years now, starting in the city of Osaka pioneered by MC Duff, MC Dekishi, and the late MC Tacquilacci, who were collectively inspired by Roll Deep's Rules & Regulations mixtape.

Snow is a somewhat elusive MC, with not many public releases or appearances. He featured in a Tokyo Live Set back in 2016, and a UK x Japan link-up back in 2017 alongside Bright Sparks and Pakin. He's also known as Nowbass and is a member of the collectives 08G-z and GUM PROJECT.

Pakin and Snow also released "I'm From A Place" in December 2017.

Beyond has been around for quite a while now, featuring on a grime set back in 2013. Earlier this year, he released "Better Than Me". Common in Japanese grime, he has a distinctively fast flow. He is a member of Japanese collective 140 alongside Catarrh Nisin, F-lager, and Ritzzz.

Catarrh Nisin is one of the more prominent MC's, at least from a British grime perspective. He featured in the UK x Korea x Japan link-up, and a Risky Roadz freestyle a couple of years ago. Like a lot of Japanese MC's, his flow is noticeably fast.

Itaq is the interesting odd-one-out here, as most of his music would fall under hip-hop. Itaq has however collaborated with Japanese producer soakubeats before, who has dabbled in grime. The two made "Super KAMIOKANDE" together.

Fukushima-born MC Pakin is one of the most well known of all of Japan's grime MC's, initially gaining prominence on the currently defunct GrimeReportTV YouTube channel. From there, he was invited to join the UK crew, Dark Elements. Pakin and Devilman performed a freestyle together back in 2013. Pakin employs a unique style of spitting, using deep inflections to give himself a stand-out voice.

MC Duff is a veteran of the Japanese grime scene, being among the first generation of MC's to prop up in Japan (specifically Osaka, where the style originated) alongside MC Dekishi and the late MC Tacquilacci around 2008, collectively inspired by Roll Deep's 'Rules & Regulations' mixtape.

Earlier this year, he dropped "俺らの夜は終わらない" and "GRIME IS POWER".

B.Ranks is an Austrian DJ born in the city of Linz. In 2016, he started a grime and bass music event called BLVZE. Much of his work can be found on Soundcloud.

In a Vice interview from a few years ago, P.TAH revealed he has been interested in UK music (particularly grime) since the mid-2000s. Since then he's released songs such as "Rastlos" and "Champions League".

Rugged has been around for a good 10 years or so now. Over grime, he has a fast high energy flow, like on "Holla-luh-yah One Take Remix".

Oh and that time he linked up with the legend General Levy.

Kinetical has been around for a few years as well, dropping Reggae, dubstep, grime, and hip-hop tunes over the years. In 2017, Kinetical released "My Own Thing" where he freestyles over Jammz "Keep It Simple", Jme "African Zulu Warrior", and XTC "Functions on the Low".

New Zealand is primarily represented by STS Crew with members Stanza Blade, Joe The Freakshow, and Wylo, as well as General E and Psycrow. The group was founded in 2009 and is responsible for most of the vocal grime that comes out of New Zealand.

The Czech artists hosted a 'Grime Olympics Session' set a month a month before this here. Czech Republic hosts one of the more unknown (in the UK) but active overseas scenes. Most of the artists below have been around for years.

Pain is a member of the Czech crew DOTS (Darkside Of The Sun). A notable song of his would be "Nezajímá".

Ridig is also a member of the Czech crew DOTS. Earlier this year, he released "Slap" on an instrumental that, well, slaps.

Dony Dee doesn't have a lot of content online, with only the scant grime tunes floating around, such as "Nedelej Ze Vis" released back in 2013.

While a hard to search for name, Joshua has been around for a few years. He linked up with Lady Shocker in 2016 on "FUNK'D NIGHT".

US grime has been around in some form or another since the early-mid 2000s, where a grime scene developed amongst Brooklyn's Caribbean community. A new generation of artists disconnected from this early scene arose in the 2010s, represented here by the American Grime collective. The collective is active in the US hosting UK electronic music events wherein they play grime.

The collective has also released a lot of music this year, with MC Jumanji dropping freestyles. The group is also represented by the two DJ's Micahel Savant and Timbo Slice.

Twisty was among the first international MC's to experiment with dubstep around 2002, also experimenting with DnB and UK garage around the same time. He featured on "Best of the Best" last year, along with an assortment of other US MC's.

Werd2Jah, unlike the others, is a member of the collective Planet Earth. Werd2Jah featured on a remix of "Times Up" earlier this year, produced by Cubs and Berrix. Werd2Jah is unique in the US scene for his patois accent.

Estonia is the only scene on this list we have very little knowledge of, at least until now, and may be one of the newest scenes to be represented in Grime Olympics. Turns out DJ Shromik has been pushing grime for a couple of years and has dozens of native MC's on his YouTube channel spitting over grime instrumentals.

Grinks (aka Gringo) released "Hinnasilt/Lasnskit" in 2017, the first half at least is over a grimey beat. He's also done a few sets, such as the Home Grime Cypher back in 2017.

We don't know much about Ske, other than he featured on a live set DJ'ed by Shromik. The set also features Discarda, Ransom FA, and Eyez.

Seaduskuulekus seems like more of a hip-hop guy, but he has also featured on live grime sets DJ'ed by Shromik.

We wrote an article on Brazilian grime here, so check that out if you're interested in the history and what's going on at the moment in Brazil. Brazil is represented by the group Turistas de Guerra who recently just dropped the first Brazilian album 'Tudo Grime'.

Italian grime is one of those scenes that is relatively obscure and hard to find information on. Many of the MC's represented haven't got a large catalogue of songs.

Ninjaz is a member of the Italian collective, Numa Crew. The crew has been around since 2005 and released a variety of dubstep and grime over the years. One of his grime songs, "TNT", was released in 2017. Ganji Killah released a freestyle over "One Take" in 2017. The three, including K!dust, released Ma Di Che in June 2017.

Yodaman MC and Mouri are among the newer MC's here. Last year, Yodaman dropped a freestyle on Grime IT, an Italian YouTube channel dedicated to promoting grime. He's also freestyled over Ruff Sqwad's "Xtra". Mouri also has a freestyle on Grime IT where he spits over "Lean Back" by Jook. Not much else can be found of his, however.

Most of Toni's music would be hip-hop, however, he does have a few grime releases, such as the freestyle he did also on Grime IT.

Blackson is one of the more active grime MC's from Italy. He dropped "Never Back Down" in March this year and a Risky Roadz freestyle later in the same month.
Premiere: Jakebob laces a velvety R&G beat on the introspective "Kold"
Premiere: Riddla brings shadowy cut "Take It Back" to Antennaterra's new compilation
Inside: Invader Spade shares his approach to imaginative new beat tape 'Final Round'
Interview: Doni Rampage on his history in grime, lessons learnt and future focus
Premiere: Prizma recruits Killa P and Long Range for skippy vinyl exclusive "Youtdem"