Swifta Beater conducts Ghetts & Safone for 'Gwan If You're Bad' 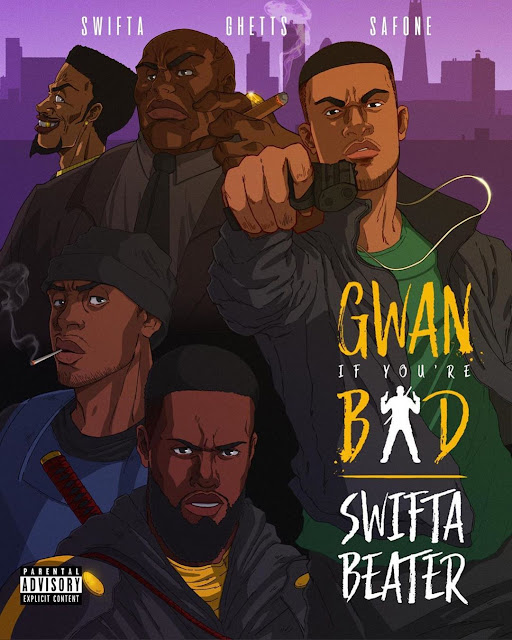 With affirmative percussion and commanding brass, Swifta sets motion on this mass of a calamitous sonic-movie. As is with the location beatsmith, this instrumental a construction of powerful tonalities - without using dark or malicious sounds, Swifta portrays a sense of dominance and weight that is further transitioned into the performing artists.

"I know I’ve been quiet in recent years but I’m gassed to announce that I’m going to be releasing my 1st single on Wednesday!!! If you know me then you know I have to come with that electric energy, so I had to get help from @safonemadone & @therealghetts to bring you the maddest energy! I had to go above and beyond for visuals too, it couldn’t just be a regular video so I hit up @ravindlekh & @ivens_illustration to create a mad storyline to match!" - Swifta Beater

Testament lyricist, Ghetts, enters first to absorb the instrumental's electricity. Using a patios coverage, chest projection, and confidence, Ghetts spits the hook and narrative; "gwan if you're bad then". This isnt J. Clarke for sure, yet this also doesn't seem completely either Ghetts or Ghetto. The East London MC combines the viciousness of Ghetto, with the grown and more calculated confidence of Ghetts - the scorching licks of electricity are just as wild and severe but true and direct, not random. With his versatile style, Ghetts switches up flows, tones and intensities to deliver this intense performance.

As the embers reaching peak temperature, Safone takes charge, with similar command but a calmer energy. Chatting big talk, the Birmingham MCs portrays why he's not one to mess with; in or outside of music.

"I'm the guy that makes guys that don't like grime, say that its grown on them"