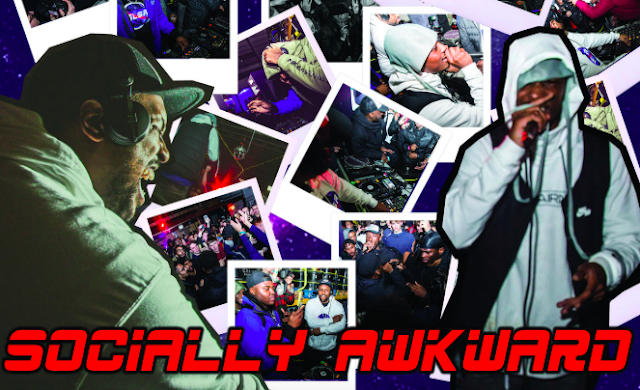 Now long-established affiliates, South London grime producer Grandmixxer and Nottingham lyricist Mez have teamed up once again for their first ever full project together, the Socially Awkward EP.

With an already vast back catalogue of collaborations including an "SLSA" vocal, "Ready to Skeng", "Antagonist", "Open the Door" and "For the Books", the two Wig Power Foundation members were bound to join forces for a whole body of work at some point – the result is a five-track offering featuring four vocal tunes and one instrumental. Sonically, each track is textbook Grandmixxer – a distinctive amalgamation of vintage Roland drum machine cowbells and claps; stubby, phased basslines; and orchestral hits.

Two of these tracks may already be familiar to listeners. Opener "Climbing" was in frequent rotation throughout Grandmixxer's monthly Grime Shows on Rinse FM last year, while "Go Freestyle"—an indirect send for Yizzy and Chip—was released in the form of a music video in May. The EP's closing bonus track, "Pump Action", is an instrumental version of "Real G Countdown".

Socially Awkard is out now via Grandmixxer's independent record label, South London Space Agency, and can be streamed in full below.