We run down Spooky's impressive slew of releases from last week 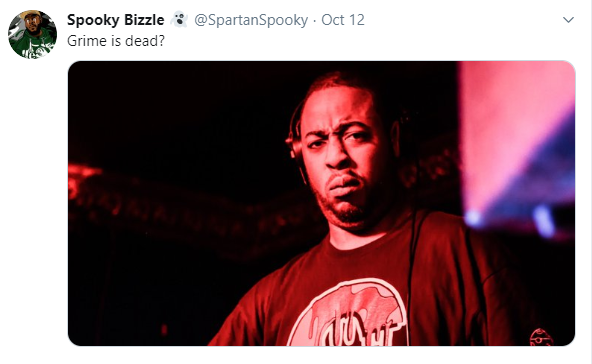 Dropping five EPs in five days is far from common, but in his efforts to fully #freeupdariddims, Spooky has done just that. The prolific producer and DJ dropped no less than twenty tracks, including a previously unheard remix and a re-release of a Ghost House classic. It seems that Spooky is clearing out some of his back catalogue ahead of the release of his sixteen-track debut album on 1 November, getting us ready for the new heat he has brewing – plus, he’s made it clear that a second album is well on the way as well.

The Rusty Bell EP was the first to come. A re-release of the original Ghost House offering from back in 2011, it also includes the J-Sweet remix. The hypnotic B-side, “Snake Charmer", alternates between dark and stomping minimalism and psychedelic synth sequences. An unheard remix courtesy of Mike Delinquent Project is included, boldly branded as a “Grime Skanker”. It doesn’t disappoint.


Next was the Poison Ivy EP. Labelled GH008, the EP consists of four unreleased 2012 dubs. For the title track, crunching bass and stripped back percussion collide for a noise-heavy shuffler. A distinct dubstep influence appears in “Slush Puppy”, featuring a bassline reminiscent of old Dub Police flavours. The final cut, “Wavey Riddim”, is one of the standouts across all the EPs, as rolling subs layer with climbing and falling lead harmonies to create a track crying out for an MC to ride live and draw out reloads.


The Gorgon EP is something of a change of pace away, but still plays into Spooky’s multi-genre talents with a mashup of grime, bassline and garage. Each track hits hard, taking the stems that went into the EP in varying sonic directions. “Gorgon” is in a league of its own, an off-balance 2-step bouncer carried by blaring low-end melodies. “Body Count” is similar but brings a heavier vibe. Trading skippy rhythms for pure power, the beat is accented by a ringing top end that sounds straight out of the soundtrack to an alien abduction film. “Critterz” closes out the EP with a moodier liquid pulse that’s sure to get the heads moving.

Spooky’s description of the Goblin EP reads ‘4 raw-to-the-core grime instrumentals ready to clart any club’, and he’s right. Linking up with Australian producer Juzlo, the EP runs through the foundational sounds of the genre. Spooky’s trademark bass punches litter the collection. “Crudstate” embraces sweeping sub-frequencies and frantic drums, “Gromeo” builds gradually from washed out strings to a surging bassline and clattering rhythms, and “Murdera” Style relies on the upfront sonic impact of repeated distorted kicks to bring the fire.


Last but not least is the 1 Night EP. Spooky created the first track, the instantly recognisable “Streamline”, on a livestream a few years ago. Later the same night, he put together three more atmospheric cuts to close out the project. “Grunge Riddim” and “Airhawk” are two more distorted wobblers, but “Lost Cause” brings a more experimental sound and a syrupy wave aesthetic.


All are out now ahead of Spooky's album release on 1st November.