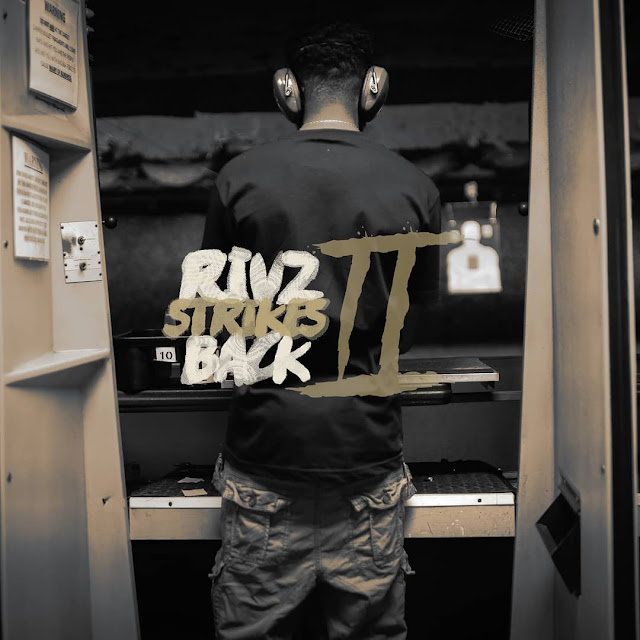 Jus Rival drops Rivz Strikes Back II, and with it, allows a glimpse into his current mind process. From the gully to the mature, Rivz creates a beautifully flowing, complete record, that holds many key elements of life. And here, takes us on a musical journey of its ups and downs; light and dark; the real; the personal; the relatable.

Rivz Strikes Back II is a dynamic follow on from its predecessor. Flows are on point and in abundance. Content is rich and full - from the confrontational and grimey, to the introspective and thoughtful. And instrumentals take us on a whirlwind of vibes.
Rivz puts a lot of himself into this record and it shows. We receive a snapshot of a man - though ageing, still young; knowledgeable through experience; with a rife history in music; and aware of significant change.

“Walk in the game, took violent steps / Look right and left, and I light my heads / Pattern up or get pied on set / Them man there, just minor threats”

The East Londoner commences with nostalgia. From the US to the UK, some of the greats have patterned this record. And this is how Rival begins; with a colossal introduction from an iconic flip on “R.O.N” (The Fugees "Ready Or Not"). Starting with a hair-tingling rumble, moving into Rivz vicious bars, and ending with a mean bass solo.
“Arya Flow”, produced by Filthy Gears, is next. Previously released as a single in August, it ushers in a surge of energy and some lightening lyrics from the MC. Rap’s infamous evil cousin drill, breaks down the door in the following track “Good Game”, before we reach our first break. As the “old man” hits 30, Rivz lets everyone know whether he can still spit, on a quick skit titled “Old man Rivz”. This skit comically breaks the cycle of the project, and provides a detailed insight into himself and history; old friends; old environments; and the wash of MCs. 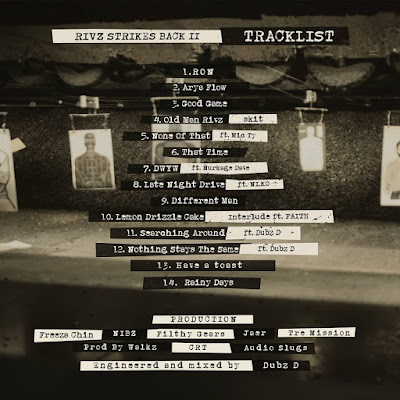 “None Of” holds the record’s first feature; from Mic Ty. This confrontational track steps to its opps and uses its screw-face as a narrative. After the pair have finished “ramping with neeks”, Rivz pacifies the mix with a sweet relaxation and good energy. “That Time” represents the weekend - optimistic views, ventures for better dreams, and pleasant vibes. This laid-back atmosphere continues as we move into “D.W.Y.W” - a story-telling record and smooth fusion of rap and R&B. Sweet vibrations linger as “Late Night Drive” shuffles in; the first track particularly aimed at the women. In between the soothing chorus’ from NI.KO, Rivz speaks on lust and late night drives in pursuit of ‘love’.

“Searching Around” presents a lovely, warm and hopeful instrumental, whilst Rivz and Dubz D touch on contemplation, observation and life pursuits. “Have A Toast” pumps up the energy once again in a celebratory cheer to himself and middle finger to paigons. This song and the following, “Rebel 59”, seem to merge flawlessly into one another - though explain a contrast of tales. “Rebel 59” takes the previous’ celebrations and, as a drunken happiness turns to sudden feelings of sorrow (or sorrowful joy), we are slapped with a sense of harsh realities from Rivz. A cold wake up is presented as we go from the highs to the lows. And with that, Rivz concludes; in a warming salute to his Uncle.

The above snipppet captures perfectly the creativity and strongest elements of this record - making genuine music.
No matter his many years within the scene, Rivz still proves himself - in skill and substance. His lengthy career in fact makes him greater. Rather than grow stale, he finds new ways to explain his current truths over a mixing pot of music. He articulates his personal intelligence and experience very well; allowing us a mere peak into his world and thoughts. This, in turn, creates songs with substance, true meaning, intrigue and a flowing story line. From his early years to now, we see his content mature, his observations widen and his thoughts become more consciously analytical.

This is an album; a body of work, not a jumble of tracks. A channelled flow of singles broken briefly by a  tongue and cheek skit, and a pleasant relief/sit-back interlude. As well as a well-crafted variation of styles and vibes - “Lemon Drizzle” offers soul; “That Time” offers warmth; “Arya Flow” offers hard-rap; “None Of” offers mean-mugging; “D.W.Y.W” offers R&B; “Searching Around” offers contemplation; "None Of" offers grime; "Late Night Drive" offers love. Whilst much other subject matter, in between of what has just been mentioned, is present in the cracks and crooks of this record.

A seemingly careful decision of track placement makes for a musical ride. Ushered hastily in with the epic, bold, strong, and demanding sounds of the first few tracks, before calming the storm with more tender tones and lush timbres. Following, we settle into a moving, observing and contemplating section, where Rivz picks apart experiences, feelings and thoughts. As this ends gently, the following section explodes in celebration, as “Have A Toast” ushers in smiles, happiness, Rivz' achievements, and dedications to wins.

It’s a 38-minute audio book of this artist’s life - real, honest, ranging, and thoughtful. Not as Rivz’ life in its entirety, more a snapshot in this moment. He speaks a lot on change. Potentially being at this middling age of 30 and being in the scene for so long, this is what jumps out to him. “Nothing Stays The Same” - communities, grime, music, friends, family, yourself, feelings, ups and downs, goals, the world.