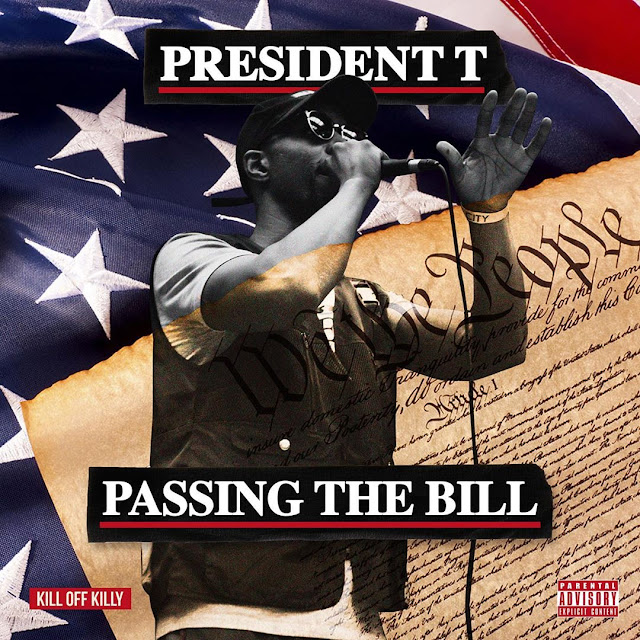 Birmingham-born, London-reared, Manchester-adapted; President T is well travelled across the roads of England. This may play part to his aged knowledge of such environments that has been well-documented throughout his lengthy discography. Neither glorifying, nor condemning it. Prez frequently touches on his past events and lifestyle in matter of fact terms - not to offend, simply to lay it how it is (other than stating to “go suck your Mum ‘til the bitch is dry” of course). This is another look into grime's 'head of state'; his latest project; and a few words from the man himself.

Prez has made a strong return to music since 2016, and now, the “stranger returns” with a latest album entitled Passing The Bill. A fully presidential envelope of adapting styles, UK drill influence, detailed crud, and the most current installment from a grime myth.
Rap is the larger percentage of this project, though Prez has ben moving in this direction from his previous releases. If this worries you, know that one thing hasn’t changed; the President’s Speech. The Meridian general retains his distinctive tone and unforgettable flow that is famous in the scene. His hypnotic way of spitting is timeless and with it, allows Prez a consistent bait to tempt us over to his musical evolution.

“I live my life with heart / Not every day rise and shine / I sold drugs that will rise to your mind / Now it’s all legal, won’t see a decline”

It’s important to scrutinise an artist’s first bars of their project. Though the record may contain thousands, this is our initial impression of what is to come - plus, they are first for a reason. This projects us straight into the album and the artist. Anyone who listens to Prez knows his history, so the above lyric fits nicely in line. The first statement pours ounces of passion, whilst the second knocks us back to reality and is truly relatable. What follows in the third and fourth, is a brief history lesson on T, combined with an encouraging finale.

“Intromation” hits our ears first. Even the instrumental sounds like the beginning or nurture of a something; as a soft and delicate melody is obtainable. A re-introduction to the President; unravelling specific information. He introduces the album; “Passing the bill, by President T”. His unique character seeps out of him constantly, at times that he may not even mean to. Simply stating the album title and artist, we are left with a familiar “Yeah”. Potentially of little significance to some, but to others, a burst of excitement that President T is here - with comparable goose bumps as when you hear “kill off killy”. The production’s fascinating plucked strings and synths pull at heart and soul, whilst the gesturing 808 thrust you up and down across the song’s veins. This track merges a moving UK drill instrumental below T’s adaptable vocals. It is the project’s first introduction of his recognisable multiple-part rhyming style; of several statements, or presenting questions and answers. His flow and vocal tonalities present a clarifying division between bars when required - seemingly walking us through each lyric whilst painting the overall picture.


“The way I see things, drill was birthed by grime, therefore it’s a young version of what I already know. Still, I would say I definitely suit drill.”

The title track, “Passing The Bill” continues the UK drill vibe. The previous song seemed more like Prez T attaching his grimey core to a drill exterior - the President’s essence with a modern sound. Here however, he leans more to the darker genre and seems to present his expression of UK drill. With a repetitive hook and a subtle salute to Stormin, this is a lowkey glare from the Bloodline affiliate, at certain others. 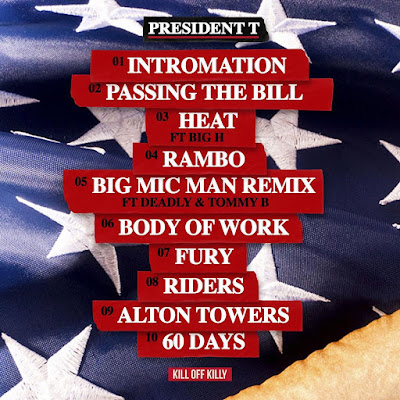 We are inducted into “Heat” by his brother and similar Meridian legend, Big H. His higher tone and slightly livelier energy offer a pleasant diversity from that of T’s low and controlled instructions. H straps up; seemingly unchanged over the years and with as outward bars as those years ago in his notorious "Practice Hours" - “When I kill people no ones knows / H in ends, stay off the roads”. This beat calms the waters whipped up by the preceding drill elements. Though still heavily influenced; its timbres are more passive. T’s stomps straight in with a strong demeanour. His vocals smother the mix from all angles, as he continues H’s chronicles of cold tales, sawn-offs, elite records, and “colouring clothes”.

The hollow tone of drill amplifies itself once more as Prez speaks to the youths on “Rambo”, but subsequently subdues on “Big Mic Man Remix” - the original from Prez’ previous release There’s Only One. Here, Deadly and Tommy B assist Prez T on reminiscing, pondering on different paths, and of course, why they’re “big mic man”. Something to note here is President T and Tommy B’s connection. It’s not senseless to see an older and younger bond here; potentially a situation of Prez supporting fledgling talent. Tommy declares an applicable bar in his verse: “If you’re an old MC, then shame on you if you don’t wana bring through new youngers”.


”In my own way, I’m trying to provide listeners, especially new ones, with a golden era that can never be brought back. Presidential values”

Drill’s authority over this record continues into “Body of Work” and “Fury” - suitable tracks for those in need of the gully and the rough. Yet, in a divergence, “Riders” revives the projects glowing embers of melody. T is righteous on this type of work; "championship grime" - his mesmerising tone and story-telling vocals over an emotion-generating instrumental. Here, Prez touches on fake riders and consequences of war.
“Alton Towers” borrows sinogrime’s nostalgic timbre as it implements a Chinese-sounding melody, over more modern drill percussion. As the drums shuffle, the track’s melody is slowly plucked whilst sweeping bass carries it all away. This, and the final track, “60 Days”, end the record on a more rap-vibe with bars that are in abundance on this project - burners, punishing consequences, the road, the crud.

Passing the Bill is President T declaring his stance on the mountain of grime/UK rap, but also the roads. His rich memoirs of climbing it, his persistence of continuing (music in particular) and all treks of the harsh wilderness between. He is of the people; of the roads; of Britain's inner-city nature and its rebellious children; no matter the genre.

At times, he chooses some remarkable beats. Here, “Intromation” and “Riders” jump out, with “Heat” closely behind. But previously, “Large Way”; "Kill Off Killy Part 2”; “King of Grime”; “Levels & Stripes”; “Big Mic Man”; it goes on. Plus, though he has kept the same energy and flow for over ten years; his voice is still interesting and addictive. Only several other MCs hold this aptitude of such an individualistic way of rapping – Giggs, D Double E, Flirty D, for instance. As soon as you hear, Prez’ commanding vocal rumbles; you instantly know what time it is.

“This [album] represents a time of change in the music. Also, I’ve become a lot more experimental with my lyrics.”

The record feels like a blend of styles and genres - T’s history in grime and today’s trending sounds. He adapts well to the UK drill and cannot be faulted for so. Every good artist at some point will either choose, or be forced, to work outside of their typical sound. Curiosity or a need to evolve will forever closely pursue them. T has obviously been heavily influenced by drill on this record; some may be irritated by that fact, others intrigued. But strip away the instrumentals, and it is still just President T - the grime, the rap, the distinct voice and one in a million flow. Greatest Ever To Touch Down was excellent and held a different style; a grime one. There’s Only One was more rap influenced. Now, the “stranger” tries his hand at something else.

Without continuously gushing on how illustrious this artist is, there is one sense of longing that bares throughout his discography - to learn more about the man, in other walks of life. His bars do allow us a wide window into the President, his life, exploits, and journeys; however, more time it’s so cryptic, and at times metaphorical, that only a minority can fully understand. But maybe that is that. This artist has had such a life that only certain others with similar knowledge or experiences will fully grasp. This open-thought isn’t an oblivious breach of privacy or self-snitching; it’s fully understood why T spits like this or doesn’t share certain things. This is just a mere observation from an eager and curious listener - potentially a little surly that particular bars do “go over his head like government drones”.

So to pursue deeper but at a different angle, his content is particularly one-sided. As mentioned above, he has become more experimental with his lyrics but other than road history and shadowing escapades, what do we know about President T?
The audience know 'current' Jay through records like 4:44; Wretch 32 from his openness and honesty; Youngs Telfon from his descriptive stories; and even Ghetts’ held a dramatic introspective evolution. If we rewind back to Prez’ first bar - “I live my life with heart / Not every day rise and shine / I sold drugs that will rise to your mind / Now it’s all legal, won’t see a decline” - this is incredible; true, real, inspiring and heart-warming almost. But, this is where it ends. How did this change legit occur? How can others in similar stances replicate this? What intrinsic steps did Prez take? This project is released under Kill Off Killy LTD; how how this journey been? How can others achieve the same? What has Prez learnt?
This more detailed leap into his life would surely be noteworthy; just food for thought.

This is definitely not a criticism, more an added bonus on what a humble listener would like to learn about the President. To his credit, listen closely enough and you will find the odd gem: “Likkle man, why you wana walk with a Rambo? / You know workers get to the bando”. Furthermore, we must make an account of the unique way that T does talk about crud - alike how Pusha T's raps on cocaine will never grow tiresome. Prez seems to be sculpted by the bitter, sharp winds of the roads; it shows and this is a huge part of early grime - as he said, he is providing an original grime feel to new masses. Darker topics are never a rarity in grime/rap, yet Prez, with his remarkable rhyming style, communicates with an older, well-experienced overlook of past events - dark, but real to some. The way Motown folks croon over their aged troubles, or the eldery will riddle you lessons rather than being direct. This is what President T is to the scene. From back in a day, with Skepta’s “One cat buying food off me from this window / Another cat buying food off President T on the driver’s side” to now. He seems to have been this unambiguous Uncle figure - wise of the roads, rare and cold realities, and raw mindsets; yet undoubtedly still ready and able to clart off a head or two.


Whatever path is taken and whatever subsequent musical focus, it seems we have a bright future ahead of us with President T in charge.


“I’ve been keeping the levels like this for well over 10 years / And you know what, man’s gonna do it for another ten / President.”