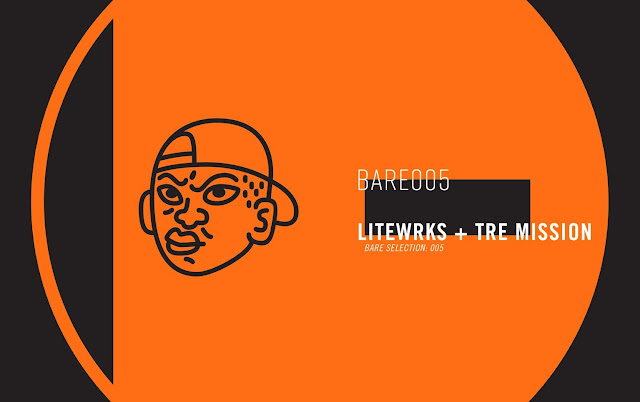 
In a world where consistency is key, Bare Selection have had this down to a T - releasing some quality EPs every couple of months since its launch in November 2018; all available via their Bandcamp. BARE001 brought flavoursome sounds from solo Tre Mission; BARE002 saw experimental waves of MoreNight; BARE003 beckoned icy tones from K-Notes; whilst BARE004 looked to London for Manga and Maxsta, alongside MoreNight. Tre Mission returns now, together with Litewrks, for the fifth installment.

The 3-track EP first unites both Canadian producer's on "Balotelli"; as after an individual solo instrumental its offered by each - "Cafe is Dark" and "God Body". All mixed and mastered by label co-founder Freeza Chin. Like previous works from the team, 005 offers various sonic paths but all connected via the landscape of grime, rap and experimentation.

"Balotelli" fires first, directed by both producers. A gentle, foreign (to English) vocal sample soothes us throughout the introduction as a compelling scuffle of raw percussion and an almost high, drone-like pad generates rhythm. This flips completely into a grime/garage hybrid seemingly sapped by alien-like minds. Percussion switches to a prominent, snappy pattern whilst bass bounces beneath an assortment of smooth vocals and futuristic beams of synths and transitions.

Tre Mission takes control of the following "Cafe is Dark", but unveils a similar extended-introduction as the previous, building tension. Glitchy tones from a synth gone haywire, scatter above the mix during which the meanest, warmest, roundest sounding bass bubbles with momentum. A wicked breeze picks up, launching us into a storm of shuffling hi-hats, cracking snares, icy strings, and a thriller bar-ending melody (if you can spot it) as the hypnotising bass and above-synths continue to dance. See GHS shut it down on Reprezent Radio.

Not content with the various tones already, Litewrks modifies once more by planting the nightshade root of UK drill into soil with "God Body". Delicate colours echo out, almost tricking us into a false sense of security before the atmosphere darkens and UK drill-esque vibrations explode. Trappy hi-hats scurry alongside dominant snare and unresting 808s making for a choppy ocean, together with the light but freezing melodies. It's a large and assertive conclusion to a barrage of developed sounds from the talents of both artists.

Co-founder of Bare Selection Jayemkayem, states about the EP and sound they're bringing: “UK sounds like garage, grime and drill are still quite niche here, but it’s really exciting that our label can provide a platform for artists like Tre Mission and Litewrks who are making some world-class music in those categories and show that Toronto’s talent and diversity runs deep.” Even Wiley agrees we need to embrace Candian grime.