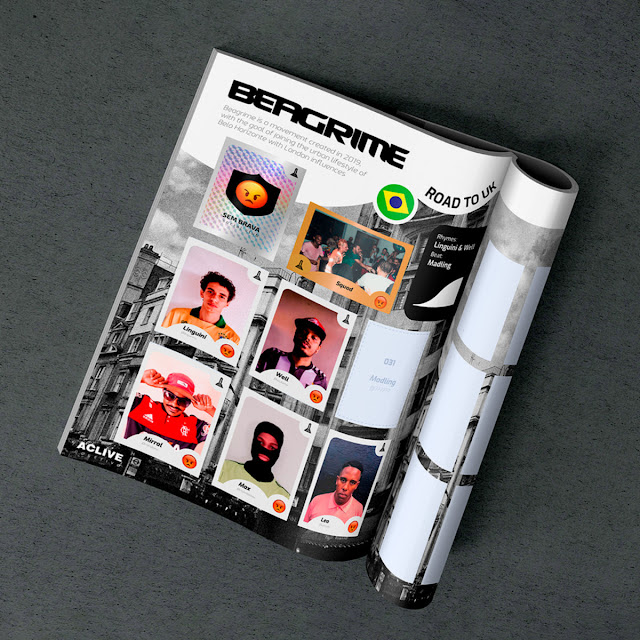 We're back again with another instalment of Donation Dubs, sharing some of our favourite tracks found while digging online each month.
As per usual, there are two sections: one with free or pay-what-you-choose downloads and the other for releases that have a fixed price but that are an absolute bargain.
You can also check out our Donation Dubs 010 mix on SoundCloud, exclusively featuring tracks from this list, at the bottom of the page.

Have a scroll, have a listen, and support the artists who catch your ear!

Linguini & Well – Beagrime
The Brazil scene has been growing and growing, and this single from Linguini & Well combines elements of the UK genre with samples of the baile funk sound. Shouting out their home city of Belo Horizonte - or Beaga to its residents - "Beagrime" draws parallels between the urban identities of Brazil and the UK over a wobbling low end and rhythms made for dancing.

Bamz & Scratchclart – The Classix 2
If you're looking for cutting-edge UK Funky vibes, Bamz and Scratchclart (aka Scratcha DVA) have just what you need in their The Classix 2 release. The opening cut, "Dark Gallium", sets the bar high with a feature from garage legend Wookie, and the EP doesn't let up after that. The vocals from Princess Nyah and Bamz, who soulfully repurposes Sophia’s original “I’m Right Here” lyrics for a new beat, take each of their contrasting tracks to the next level - "Hooliganz" has a dancehall feel while "Ryt Here" has an undeniably classic house energy. "Tell Dem" and "Tell Dem Agen" wrap up the project with a return to the staples of  bouncing bass and bold 4x4 kicks, yet the second version still veers into more experimental territory with a unexpected grimier syncopated breakdown.

Lumes – Amethyst EP
The final instalment in his Gem series of EPs that included Emerald, Ruby, and Sapphire, Lumes has come through with his Amethyst EP. You can see how much of a prolific producer he is by glancing at the slew of snippets he constantly showcases on his Twitter, and Amethyst backs up that consistent workrate. Lumes' selected instrumentals are complex and detailed but importantly manage to hold onto their spaciousness and scale. These aren't war hitters or rave beats - instead, Amethyst offers something a little more refined.

SomeNextGuy – Brass Face EP
By contrast, SomeNextGuy chooses a heavier angle on grime production on his Brass Face EP. The opener, "Stains", wastes minimal time with a short build that drops into blaring brass and off-step sub patterns. Both "Stress" and "Brass Face" have a sense of restraint about them, feeling like a bit of a calm before the storm of "Take". Although "Take" is less than a minute and a half long, don't underestimate this airhorn-laden beast of a beat, with its tearing, combative bass and aggressive, driving drums.

2002 Records - The 8 Bar EP
Slimzee & Garna launched a Bandcamp page for their Slimzos sister-label 2002 Records, meaning that the previously vinyl-only imprint will be making their grimy goodness available in a digital format. The 8 Bar EP calls back to the classic style of 8-bar switchups, with raw, stripped-back beats from As.if Kid, Garna, Smokescreen, Iccee 88 and ZimZima. If you want unadulterated, oldschool grime instrumentals that are free of gimmicks and unnecessary frills, look no further.

1Forty - 3 Years of 1Forty
Marking 3 years of releases, Leeds imprint 1Forty has unleashed with collection of VIPs, featuring one track from this year at each stage of their well-established release cycle, spanning across Grime, Bass and Funk & Garage. For the grime offering, Hayz has reworked his "Hightop" instrumental, taking those already atmospheric flowing synths and sweet plucked melodies, and pushing the track to new heights, taking you along for the soaring ride. NLMT & FALLU's "Time VIP" gives the bassline bubbler an even more lively sound, and Murder He Wrote twists his electrifying original production on "Worthwhile" into a deeper, darker garage skanker that still fits Logan's delivery like a glove.

HITPOINT – Crystal Maze
Spanish producer HITPOINT's Crystal Maze release strikes a balance between calming and frantic energy. Swithcing between shimmering, drifting relaxation and harder punching sonics, the tracklist links together to form a short but complete journey. The comforting isolation of "Red Seabed"gives way to the crowded audio of "Crystal Maze, and "Cheese & Diesel" combines floating harmonies with firm bass and kick foundations.  Finally, "Icicle Riddim" rounds off the EP with a skippier, rhythm-focused beat that still holds onto the trademark sweeping soundscapes of the other tracks.

J 2EEZY – Angry
Hailing from Auckland and now based in Christchurch, J 2EEZY is flying the flag for grime on the other side of the world with this impressive debut EP, ANGRY. The pure brutality of "8 Rounds" is a definite highlight as J 2EEZY's raw style of delivery matches the grinding, growling instrumental, and listen out for a feature from Mayday on "Street Cred" as both MCs bring their skippy flows to a more clean-cut beat.

FFSYTHO & Yelz – Bop Through Ya Manor Remix
Well over a year ago, Northampton MC FFSYTHO grabbed huge attention with her "Bop Through Ya Manor" single, spitting over a fiery beat from Filthy Gears. Wanting to share the love, she later freed up her vocals from the track, calling on producers to put out their own remixes of her tune. Yelz's version dropped at the start of the month, combining the venomous verses with an ice-cold string and bass combo to give another solid foundation for FFSYTHO's blistering flows to leap over.

NULO - Maverick EP
We started with one Brazilian entry and we're finishing with another, courtesy of NULO. The two tracks on his Maverick EP show his style of melodic grime beatmaking: both "Treme Terra" and "HOLD UP!" have a smooth, meditative quality to them. "HOLD UP!" takes shape around a sweet, mesmerising guitar tunes, and "Treme Terra" makes use of ethereal halftime chords that filter through ebbing bass and sparse kick-and-snare sequences.

Check out the Donation Dubs 010 mix on SoundCloud: