The #MakTenQuickMixChallenge has DJ’s chopping faders all over the UK 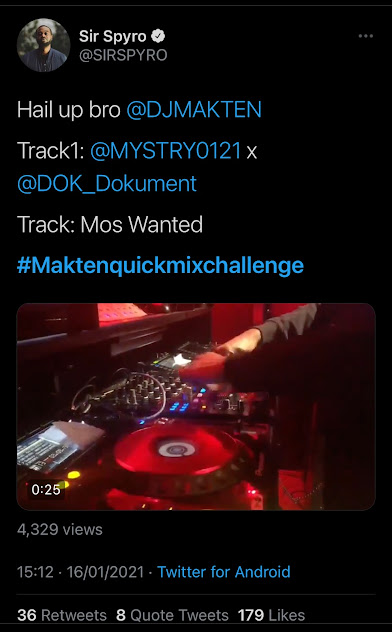 The various lockdowns throughout the last year have prompted a lot of improvisation from a community whose income relies on public spaces being open. The YouTube platform and event organiser Keep Hush provided a merch service to help struggling artists, Bandcamp have introduced the now famous Bandcamp Fridays, and many producers have turned to “at home” broadcasting via Twitch and Instagram live.

But what about those who rely solely on venue spaces? The art of the DJ has become something we see synonymous with other forms of music. Many DJ’s are also producers and are able to sell music as part of their income.However there are a few DJ’s in the grime scene who haven’t had tue opportunity to play for a long time.

Legendary grime DJ Mak Ten decided it was the finally the time of the selector. The Mak Ten Quick Mix Challenge started with an open call to all DJ’s- upload a video of your best mix/blend with the hashtag and spread the word. Faders across the country were dusted off and obliterated in the spirit of grime once again; it was like a highlight reel chops and cuts.

After 3 days of the Quick Mix Challenge, word had spread to 1xtra where grime royalty Sir Spyro (below) took his turn, perfectly carving a Mystry dub into some classic DOK.

It’s been a great way of exposing the current and future talent on the decks, long may it continue. You can keep up to date with the challenge by searching #MakTenQuickMixChallenge or by following Mak Ten on Twitter.